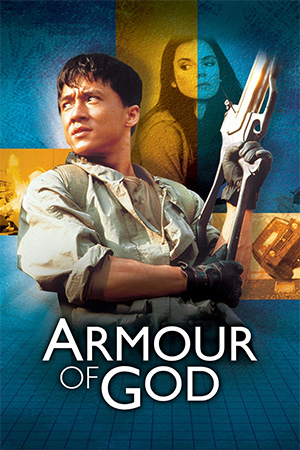 The opening scene of this film is a memorable one for a number of reasons. Firstly, Eric Tsang was originally in the director’s chair, Jackie sported a short basin like haircut for probably the only time ever, but more importantly, as every Jackie Chan fan would know, it was his closest brush with death as a simple jump ended with a hole in his head and emergency surgery in Yugoslavia.

After the long lay off, Jackie returned, lengthy hair restored to take over as director, canning all original footage minus the aforementioned opening sequence in which Jackie’s character ‘Asian Hawk’ (or Jackie in the dubbed version!) steals a sword from an African tribe to sell at an auction.

The movie is a little short on action until the end except for a car chase midway through the film which was clearly ripped-off from his earlier film ‘Wheels on Meals’. It is worth the wait however, as the finale sees Jackie battle a room full of monks, followed by four tough Amazonian women showcasing some of Jackie’s best choreographed action after ‘Police Story’.

Interestingly, Cynthia Rothrock was originally asked to play the final villain but chose a larger role alongside Jackie’s Opera School brother Yuen Biao in ‘Righting Wrongs’ and to this day has never been seen in a film with Jackie. He did produce and style the action in ‘Inspector Wears Skirts’, and would have appeared alongside Biao, Hung, Rothrock et al in ‘Millionaires Express’ if he had not fallen out with Sammo on ‘Dragons Forever’. Also worth noting is that this is one of the only Jackie directed films to show bloodletting and some nasty deaths.

The last twenty minutes alone are worth anyone’s money, as you will undoubtedly rewind in order to be repeatedly amazed by one of the greatest physical performers of any generation.