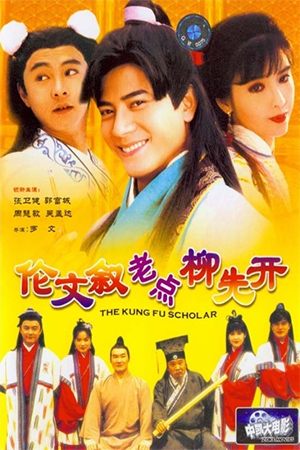 Kwok and Cheung play two good friends who both attend the same exclusive school and both engage in various disobedient antics while there. Kwok’s merriment is soon compromised by the appearance of a beautiful girl who he immediately sets his eyes upon – and it’s a fairly safe bet that he wont fail to capture her heart. Into this already confused set of circumstances is the realisation by Kwok and Cheung that their teacher (Leung Kar Yan) is in fact a fugitive rebel whose enemies have been tailing him. When the teacher’s main enemy (Liu Chia Hui) shows up with his array of henchmen, the two young students must quickly mature and join their honourable teacher in battle.

It seems that the kung fu boom of the early 90’s managed to effect every single recognisable star in Hong Kong with some incredible casting taking place (Danny Lee as a swordsman in ‘Sword Stained With Royal Blood’!). The one thing that stands out about this lame effort is the use of two veteran stars in two pivotal roles. Aside from this, the film is a weak hybrid of comedy – albeit the over-the-top and totally unfunny variety – and barely watchable action. The sad denunciation of this film is that, even when the action does come, it is in such short supply and not really worth the long wait. Aaron Kwok is the most impressive Cantopop idol in terms of fighting ability (due to his time as a dancer), but ‘The Kung Fu Scholar’ offers him precious little to prove this. Instead the focus seems to be on the under-developed and uninteresting romance between Kwok and Chow and the annoying comic persona that is Dick Cheung. Cheung no doubt has thousands of fans in Hong Kong, but like his namesake Nick, he is very much an acquired Eastern taste and leaves the majority of western viewers frustrated at his constant intrusion into any tension. There’s little to recommend this uncomfortable kung fu comedy so don’t be in any hurry to watch it.