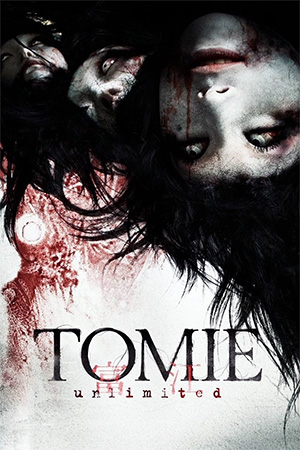 Based on the original Manga by Junji Ito, cult Japanese director Noboru Iguchi’s ‘Tomie: Unlimited’ may not be as excessively gory as his previous efforts (‘Machine Girl’, ‘Robo-Geisha’, ‘Mutant Girls Squad’) but it’s still a surreal ride with plenty of the filmmakers trademark weird creations and a tone that veers wildly from creepy to gross to bonkers black comedy. Tomie (Nakamura) is the most popular and beautiful girl at school. Her sister Tsukiko (Arai) lives in her shadow and has a crush on Tomie’s boyfriend, Toshio (Owada). On the way home from school one day, while taking pictures, Tsukiko bumps into the two. While taking pictures of Tomie, a freak accident occurs when a metal rod from a near by building site falls, impales and kills Tomie. A year later, Tsukiko and her family are still mourning the death of Tomie, only for her to suddenly show up alive. And that’s when the weirdness begins. Tomie holds a bizarre grip over all those in Tsukiko’s life turning her parents, friends and even Toshio on her in a strange and gruesome struggle for control.

Girl ghosts with long hair and malicious intentions, spirits coming back from the dead to haunt those that did them wrong and odd sibling/family relationships are nothing new to Japanese horror cinema. But when you add in the outlandish mind of Noboru Iguchi you get something a little different than your run-of-the-mill longhaired girl ghost flick. Rhyme and reason is pretty much jettisoned from the get go as no-one questions Tomie’s reappearance and she exerts control over everybody with apparent ease. She can also appear in several places at one. These facts matter not as the purpose is to creep the viewer out and as the running time ticks on the madness taking place on screen escalates. And on these terms the film works well. The initial creepiness and allusions of delving into the darker side of sibling rivalry and dysfunctional families (though there are a few unsettling scenes of such things) that the film starts with soon give way to over-the-top gore and weird mutated creations.

While Iguchi reins it in somewhat here, his gory and weird creations (courtesy of gore alum Yoshihiro Nishimura) are still in abundance and contribute to the black comic tone the film seems to descend into. So we get possessed sushi (!), Tomie’s severed head appearing out of a bin and talking to her father, a weird headless version of Tomie which makes a very unsettling noise and come the bonkers finale, a giant Tomie and loads of centipede like Tomies made up of just her head. Yep, it’s business as usual for Iguchi. All this absurdness adds to the entertainment and while it may be a little gross and distasteful for the casual viewer, ‘Tomie: Unlimited’ is still a decent slice of oddball Japanese horror.