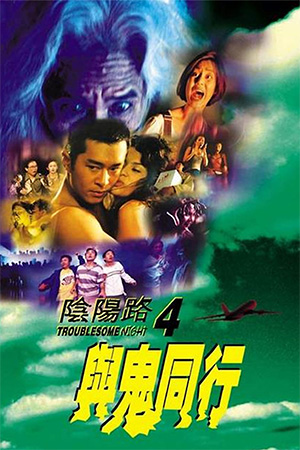 Between an enthusiastic tour group and a handful of fellow travellers, a host of Hong Kong residents experience a holiday they’ll never forget while vacationing in the Philippines. International courier Alan Hung (Timmy Hung) has been tasked with the safe delivery of the ashes of expatriate Filipino girl Leah (Via Veloso) to the family home, several hours outside capital Manila. Once his local contact, Mario (Anthony Cortes), joins him on the journey his assignment is soon fraught with eerie precognitive dreams and strange apparitions. Meanwhile, back in the capital young newlyweds Apple (Pauline Suen) and Wing (Louis Koo) are given an ominous warning by a local fortune-teller.

Wing is dismissive of the omen, but an evening outing to a go-go bar and her husband attracting the impulsive attentions of an exotic dancer (Ana Capri) leaves Apple with cause for concern. Elsewhere, tour group bad-boys Leonardo (Simon Lui), Dicaprio (Cheung Tat-Ming) and Driver (Wayne Lai) are determined to take advantage of the city’s ladies of the night. However, a phantom seductress (Aya Medel) and nightclub packed with malevolent demons soon changes their minds. As for philandering businessman Mr. Wong (Raymond Wong), his plans for a dirty weekend stop-over with his secretary (Karen Tong) are repeatedly thwarted at every step by omnipresent local spirits who always seem to be one hotel ahead of them.

When the original ‘Troublesome Night’ (1997) turned out to be something of a modest box office hit on release, and the follow-up of the same year went on to outperform its predecessor, Nam Yin suddenly found himself with a winning formula on his hands. Director and cinematographer Herman Yau (‘Gong Tau’, 2007) was brought to the fore as the series’ supervising director, having graduated from a co-authorship role on the first film where he served alongside Steve Cheng (‘Bio-Cops’, 2000) and Victor Tam (‘Blind Romance’, 1996). Come the fourth instalment in the series, produced under the banner of Raymond Wong’s Mandarin Films (with Wong himself making a guest appearance in the film), regulars Louis Koo, Simon Lui and Wayne Lai were bundled up with a group of new and popular artists as well as the usual production team and shipped off to the Philippines to give the production a slight change of scenery with a wholly different South East Asian flavour. Joining the cast and crew in Manila were a handful of local performers including (soon-to-be) award-winning actress Ana Capri (‘Pila-Balde’, 1999) and television stars Anthony Cortes, Aya Medel and Via Veloso. Returning writers Chang Kwok-Tse (‘Tiger on Beat’, 1988) and Kenneth Lau were also on-board with a script that accentuated the new Philippines locations.

As per the previous films in the series, ‘Troublesome Night 4’ (1998) returns to the “Yin Yang Road” (the literal translation of the series’ title) in anthology format, this time linking vignettes both haunting and humorous by tying all of the episodes together under the umbrella of a group of Hong Kong holidaymakers abroad. The opening story makes fine use of Sammo’s eldest boy, Timmy Hung (‘Flash Point’, 2007) in one of his earlier starring roles. His international courier, for DHL cipher DIM (itself a cheeky sight-gag), is earthy, likeable and appropriately naïve as to the supernatural occurrences going on around him. Anthony Cortes brings the local quota to the opening episode as Hung’s offsider Mario, paired with Via Veloso (‘Animal’, 2004) as the wandering spirit housed inside Alan’s funereal package. But it is Hung’s character and the oft-amusing fashion in which he handles each ghostly encounter that makes the first act so memorable.

The second story, headlining an encoring Louis Koo (‘Election’, 2005) and debuting Pauline Suen (‘Mr. Mumble’, 1996) tones down the humour in deference of delivering a satirical dig at the Chinese trait of investing overzealous faith in superstition. Koo and Suen make for a cute couple, being that this was long before Koo evolved into the shaggy-headed rogue that many of us have come to love, and the tension between the two is palpable once Suen’s Apple goes completely out of her way to ensure that a fortune-teller’s omen becomes a self-fulfilling prophecy. After a steamy shower love-scene in the opening act, Koo’s vignette is where Yau also starts to push the limits of the Category IIB rating once Ana Capri is introduced as the sultry exotic dancer that insinuates herself between the newlyweds. Veteran cinematographer Joe Chan’s (‘Prison of Fire’, 1987) lens spends an embarrassing amount of time focused on Capri’s pelvic region and its gyrations during her dance sequence and her risqué dialogue ensures things end badly for all (but perhaps not so badly for Koo, in hindsight). The episode harbours a potent moral, albeit one that comes at tragic cost in this instance.

Rounding out the film is the production’s showstopper which caps off the anthology in spectacularly funny fashion. Simon Lui (‘Last Ghost Standing’, 1999), Cheung Tat-Ming (‘Till Death Us Do Laugh’, 1996) and Wayne Lai (‘Visible Secret’, 2001) play off each other beautifully as the triumvirate of eternally horny guys determined to have themselves a sleazy good time. Expectantly, everything turns awesomely sour and if it’s not the full-figured charms of Aya Medel’s hypnotic seductress putting the lads at risk then it’s a nightclub packed with demons and malevolent spirits that threatens to be their undoing. Once the three are captured by their ghostly pursuers and put on trial before a devilish court for breaking the strictures of the Ten Commandments and committing one of the Seven Deadly Sins, it’s more than apparent that Yau is having a bit of playful fun with the Philippines dominant Roman Catholic demographic. Excepting even more gratuitous nudity (from the dizzying Ms. Medel), the closing act’s centrepiece is its climactic mini-apocalypse where literally hundreds of tortured souls chase our lovable sleazebags through the city streets. It crowns the film in grandiose style and leaves all the individual story arcs to tie up neatly before the expected “sting-in-the-tail” final joke.

In a series that ended up tallying a staggering nineteen instalments, with production switching to digital video from the eighth entry and foregoing theatrical release completely not long thereafter, the ‘Troublesome Night’ films arguably hold the record as the most prolific horror venture in Hong Kong cinema history. Admittedly, for this (re)viewer, the series lost both its impetus and appeal with the departure of in-house director Yau following ‘Troublesome Night 6’ (1999) and lead actor Koo after ‘Troublesome Night 7’ (2000); there was no longer an unbridled desire to continue with successive outings with the loss of its major drawcards. However, from a personal standpoint the Philippines-lensed fourth instalment maintains its place as the black sheep favourite of those that I did catch. The Manila locations, and surrounds, lend the film a distinctive cultural separation from the remainder of the series and, of course, the whole production is far sexier than either its progenitors or successors. Harbouring twin Filipino bombshells Ana Capri and Aya Medel doesn’t go astray either; however, it’s the sheer momentum of the piece that works in Yau’s favour. Yau moves proceedings from small, intimate and personal to an eventual spiritual Armageddon without skipping a beat. And there’s enough spooky set-pieces, riotous comedy and bare flesh on show to keep even the most mercurial of Hong Kong genre fans entertained. In all honesty, what more could one ask for?