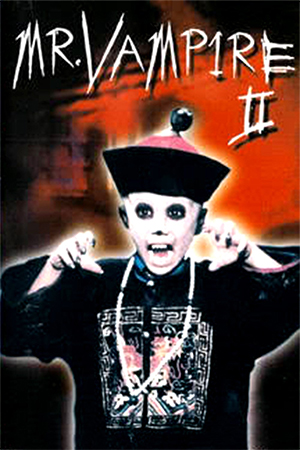 Although a sequel in name, ‘Mr Vampire II’ feels more like a mix between ‘Mr Vampire’ part 1 and ‘Magic Cop’ than a true follow up in the conventional sense. The story does not follow directly on, and takes place in a modern day setting. However, Ching-ying reprises his role as the titular vampire buster adorning his famous robes and swashing his wooden sword.

Part 1 was a masterpiece of Hong Kong comedy horror. It mixed a supernatural story with eye-popping visuals and a nice helping of Eastern style action. Unfortunately, what made the first instalment so great does not appear here, and it feels like a hasty cash-in on a box office hit. The cinematography pales in comparison, being decidedly ordinary with little in terms of vibrant colours or flair. Action is virtually non-existent, and Lam does not get enough screen time.

The problem may lie in the story itself. It starts off promisingly enough with Chung Fa (unfortunately in a non-fighting role) discovering two vampire bodies and brings them back to his lab. Yuen Biao happens to discover them, and as a photographer trying to make his name sets them free to take a prize-winning photo. As you can imagine, it all goes wrong and Biao is aided by Lam in a quest to destroy the walking demons. Unfortunately, instead of sticking to this simple story and adding in the expected fight and comedy sequences, Lau instead adds a subplot involving a child vampire – the son of the 2 ghouls on the loose. While this subplot has some nice moments, it all begins to feel a little sentimental and shallow.

As a standalone feature, MV2 is entertaining enough and has a few nice moments. One in particular being a fight between Lam, Biao and the vampires where they have all inhaled a sedative making their movements very slow. It is the norm to see undercranking in HK movies, but it is extremely novel to see all combatants moving around in slow motion desperate to avoid being attacked! That said, the action quotient is too low, and although part 1 was not action packed, it certainly had a few more exciting moments.

Not a waste of time by any means, and certainly a nice addition to the main stars filmographies, however, it is certainly not up to the standard of its ground breaking prequel.