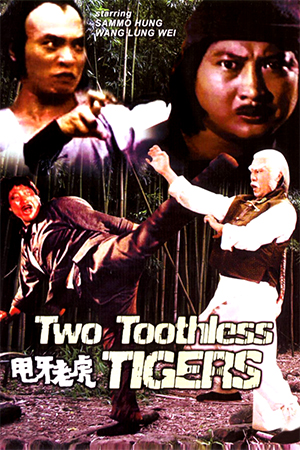 Ah Chin (Shun-Yi) is the half-witted buffoon employed by his uncle Pao (Sammo) at his restaurant. Chin is ill-equipped for the world outside the confines of the restaurant and constantly gets into trouble with the local thugs. When Chin is given the golden opportunity to impress as the cook at a meeting of two rival gang bosses, he upsets one of the sleazy underlings and incurs a vendetta. Because of this, Chin is tricked into smashing up an antiques shop and is subsequently plunged into debt with the threat of jail looming if he can’t pay it off. His only way out seems to be involve himself with a shady scheme to procure a treasure map from a notorious criminal. The plan is fraught with danger, especially when Chin learns too much about the intentions of his associates for his own good.

‘Two Toothless Tigers’ looks immensely more attractive on paper than it appears on screen. Who would imagine that combining the talents of director Ricky ‘Mr. Vampire’ Lau, Hong Kong legend Sammo Hung, Yuen Clan action and three of the Jade Screen’s most feared villains could be so bland? With a sense that this has been made up by Ricky Lau as he went along, ‘Two Toothless Tigers’ limps along with the conviction of a tiger that has not only been de-fanged, but also been shot by the most powerful tranquilliser dart known to man.

Much of the problem with this awkward feature is its uneasy attempts to capitalise on the kung-fu comedy boom without showing any real originality or initiative. The comedy is too puerile to charm even on a superficial or guilty level; our ‘hero’ comes across as a grinning simpleton rather than a comic creation who gains our affection. The overall impression is that Ricky Lau has cobbled this together with little care for originality of honest craft. Even when a hirsute Sammo enters the film , he brings with him little in the way of cohesion or even a guarantee of fight action. Only in the closing frames do we finally get the opportunity to see the portly master show his exceptional skills, but to reach that point we have to drag ourselves through an uninspiring 80 minutes of pointless slapstick.

The few moments of fight action that conservatively pepper this production are the only reason that this disappointing feature is elevated to a three star rating. When the Yuen Clan-inspired choreography starts to appear, there is almost enough excitement to make this a partial recommendation. The key word, though, is ‘almost’ as this is a mostly tiresome example of how a great cast and a capable director do not necessarily create magic on the screen. Sammo completists or very forgiving genre fans may want to exert the effort to find this relatively rare film, but even they will come away disappointed.