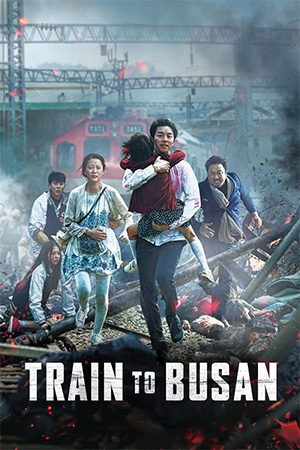 A juggernaut of a zombie movie both in its execution and the impact it had on its local box office and zombie movie culture, ‘Train to Busan’ is about as thrilling, slick and well made as films about the rampaging undead get. With hype for the film hurtling along as fast as the locomotive and zombie hordes seen in the film, it’s great to discover that ‘Train to Busan’ lives up to all the love. The first live-action film from animation director Yeon Sang-Ho (‘The King of Pigs’), the flick tells the rather simple story of a group of commuters travelling via train from Seoul to Busan when a zombie apocalypse breaks out and the passengers are then stuck on said train with hordes of marauding flesh eaters. Throw in some social commentary, strained relationships and some knuckle-wrenching tension (that never lets up) and you have a superior slice of South Korean zombie action.

Sure we’ve seen hundreds of zombie movies before, of every iteration, including the fast moving zombies seen here but it’s the sheer verve with which the film is mounted and the abundance of creativity on show that really sells ‘Train to Busan’. Yeon Sang-Ho squeezes every bit of inventive energy he has out of his setting, its claustrophobic confines and his mix of social classes who all find themselves aboard this express train to zombie hell. From impressive action design, to the clever use of set design to the scary notion of being stuck on a train with hordes of zombies, Sang-Ho keeps the viewer immersed in the tense filled situation as horrific scenario piles on top horrific scenario. Credit must also be given to the fact that, while the action and horror is often frenetic, the viewer can always discern what is going on and the director uses an effective mix of practical effects and impressive stunt work to convey the chaos rather than overdo proceedings with tacky CGI.

On top of all the zombie action and escalating horror, the filmmakers throw in plenty of strained relationships, social divide commentary and various other character dramatics for those who like a little more to chew on with all the carnage. While it’s a little heavy handed at times (with those who turn out to be evil bastards almost being so evil and obsessed with self preservation they become parody) one does get to know and like the main set of protagonists. Unfortunately, Sang-Ho can’t quite out run cliché with many characters deaths signposted a mile off and it would have been refreshing if some of these characters hadn’t predictably bitten the dust. Likewise, melodrama becomes a little heavy handed during the finale though mercifully doesn’t derail what has come before and actually proves to be genuinely moving.

While the hype machine surrounding the film may damper some viewers overall enjoyment, there is no doubting ‘Train to Busan’ is an exhilarating zombie thrill ride, crafted with care and a commitment to carnage that overall, gives the run-amok-undead genre a much needed shot of pure adrenaline.