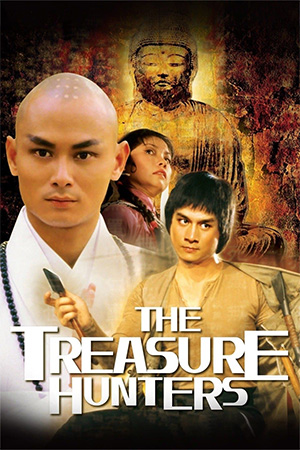 This energetic and thoroughly enjoyable kung-fu comedy combines the legendary Fu Sheng with his real-life brother Cheung Chin-Pang. The former stars as a wily kung-fu conman who uses all of his skills to trick an important official of his wares during the film’s opening. Now on the run from the law, he runs into a wealthy yet bored young socialite who wants the chance to prove himself to his family. Bearing this in mind, the spoilt son proposes a venture to his new associate: to find the fabled treasure of Chan Po Chu and satisfy their respective needs for wealth and acceptance. With a tenuous agreement put into action, the two adventurers set out in search of the very sought after treasure. Also hunting down the Chan Po Chu booty is a small band of kung fu fighting monks and, the most fearsome of all, the ruthless Lord Mo. Through a series of intricate escapades and minor battles, the dynamic duo form a unique bond that helps them in their final confrontation with the dreaded Lord Mo. In the temple that is said to house Chan Po Chu’s legacy, the various parties reveal their motives and the heroic forces are once and for all pitted against Lord Mo and his deadly female cohort.

‘Treasure Hunters’ is one of those unique films that looked as much fun to make as it is to watch. Every member of the cast seems to fully relish the role their given with leading lights Fu Sheng and Liu Chia Hui really catching the eye. It’s still poignant to see the high level of skill with which Fu Sheng performed his craft only a short time before his tragic death. In such features as ‘Shaolin Martial Arts’, ‘The Chinatown Kid’ and ‘Disciples Of Shaolin’ he showed his immense dramatic ability, but here it’s a joy to see the happy go-lucky side of his screen persona. Had he lived, Fu Sheng could well have been one of Hong Kong’s best actors.

This is importantly a kung fu comedy and within this sub-genre it could certainly be considered a solid hit. The infectious quality of the film’s comedy is well coupled with the blistering scenes of martial arts mayhem. With this in mind, ‘Treasure Hunters’ never has a dull moment and from the opening credits to the very last kicks of the finale this is a top-notch Shaw Brothers’ film. The humour may be a bit too broad for some and perhaps too pervasive, but it’s very hard not to be swept along by the sheer exuberance of the production.