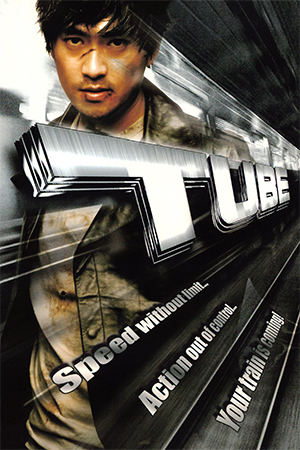 ‘Tube’ promises to take the popular Hollywood hostage scenario and mix it together with plenty of high-octane Eastern action.  But, does this John McClane wannabe hit all of the right notes or is it just a movie that we will all be wishing would die… hard?

When former undercover agent Kang Ki-Taek (Park Sang-Min) feels the government has done him an injustice, his answer is a simple one – he turns to terrorism and opts to take a crowded subway hostage so he can blow up 13 million people!  Of course, behind every good terrorist there is always an old adversary and in this case he comes in the form of Detective Jay (Kim Seok-Hoon).  Jay has been beaten by Ki-Taek in the past and since their last confrontation has become something of a rogue police officer who doesn’t always do things by the book (now there’s a surprise). After finding his way onto the train which Ki-Taek is steering towards dangerous construction works, Jay must make his way to the front of the train so that he can take out the bad guy, rescue the girl and be home in time for tea!

Clearly drawing inspiration from a number of 80’s/90’s Hollywood blockbusters, ‘Tube’ is a distinctly disappointing South Korean action flick that always feels painfully average.  All of the characters are very one dimensional clichés of their American counterparts, while the plot is so overly familiar and cheesy that it just winds up being laughable.  Both the hero and villain of the piece are also very lacking in distinctive traits, and there’s no real suspense or tension to make you care about this supposedly life-threatening situation.

As for the all-important action sequences, even these do little to improve ‘Tube’.  Despite the presence of all the necessary ingredients, the movie never seems to shift up a gear and it just winds up feeling a touch too amateur. There are numerous things exploding in different manners and a handful of fights but everything is so bland that it rarely manages to excite. It also doesn’t exactly help that the majority of these scenes are shot using a handheld camera with strobes lights so half the time you can barely see what is going on.

‘Tube’ just about manages to succeed in being passable action fluff, but it is ultimately as shallow and unsatisfying as the worst of the Hollywood blockbusters. South Korea should do itself a favour and stick to making its own types of action movies because they are clearly far more entertaining.