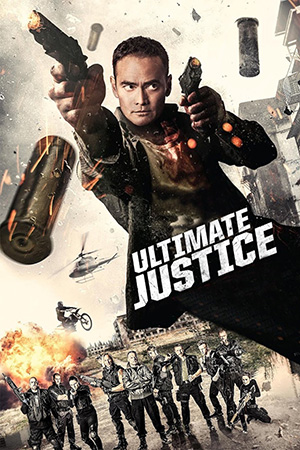 90s style action returns full force in the fast and fun ‘Ultimate Justice’, which features a fair share of familiar martial arts faces from the decade. Very much in the men (and women)-on-a-mission mould, the film follows a band of elite soldiers fronted by Gus (Dacascos) who are called out of retirement to help their former commander seek vengeance for his murdered wife and help rescue his taken daughter. Much like a surrogate family the unit reassemble fast and set out to find out who is behind the killing and kidnapping, and dish out some bone breaking justice.

Low of budget it may be but ‘Ultimate Justice’ makes up for any short comings with a commitment to bygone 90s era action entertainment and a heap ton of finely crafted fight action. The fight scenes are overseen (in part) by German high flipper and quick kicker Mike Möller (‘One Millions K(l)icks’) who also stars as one of the team. The fights are fluid and fast, and ooze creativity and high impact force. No tricksy editing or shonky CGI just good old fashioned and crisply choreographed action. Möller gets to do most of the heavy lifting and high flipping but it’s great to see the likes of Dacascos, Hues, Rhea and even Leeder cutting loose. Highlights include the opening salvo which features some heavy blasting gunplay and a cool fight at a gas station where Möller takes out some pesky douche bags.

The film is packed with hard hitting action and that’s definitely the main selling point but there is a fine bit of character development to be found in amongst all the fisticuffs and low budget explosions. Good to see Dacascos playing a hard edged hero who is not afraid of getting down and dirty if the situation calls for it but the film is all but stolen by the great Brandon Rhea (‘Fearless’). Tough, gruff but with a sensitive side his character gave up the life of violence and must come to terms with taking up arms once again. It’s a nicely played subplot to all the face busting action and Rhea makes his character refreshingly likeable and real.

Sure the budget shows its strain more than once, the big twist is fairly obvious and some of the dubbing for many of the supporting characters is, well, not great but there are many other’s out there on the web that will no doubt point this out at great length!. Overall, ‘Ultimate Justice’ is some well made B-movie goodness with its foot firmly on the fight action throttle.