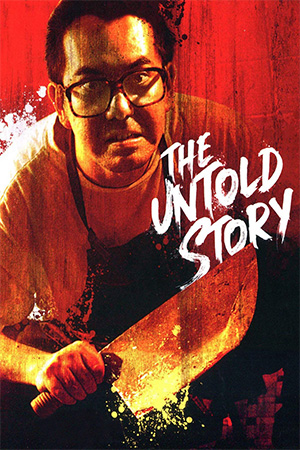 As our grisly story opens, we find Wong Chi-Hang (Anthony Wong) finishing up a game of Mahjong in which he emerges victorious. After his opponent refuses to pay up, an argument ensues and Wong winds up murdering the man. Flash forward a few months and Wong has now relocated to Macau under a new identity and is running a restaurant called The Eight Immortals. All seems relatively normal for now as Wong is attempting to get the ownership of the restaurant signed over to him from the previous owner.  Meanwhile, the police are investigating the somewhat disturbing case of a bag of body parts that has washed up on a beach. Their investigation soon leads them to the missing previous owner of the Eight Immortals restaurant and as they begin to investigate Wong, they uncover a tale of terror that no one could have anticipated…

Allegedly based on a true crime, ‘The Untold Story’ is often cited as a classic within the Hong Kong category III horror genre. While there are certainly some positives to be found here, the overall film rarely seems to live up to its full potential. Part of the problem lies with the normally reliable Anthony Wong, who puts in a performance that is surprisingly mundane. Clearly attempting to portray Wong as the man next door, he fails to create anything truly memorable and he just comes across as a grumpy old man. Sure, he grimaces at all the right points and has the stare down to a fine art, but all of this just feels like a giant cliché and it’s a constant struggle to see his performance as anything more than acting.

Herman Yau’s handling of the material also brings about a mixed bag of results. His realistic and gritty approach is definitely a plus, as it gives the film a very grim perspective that is at times suitably chilling. However, it is also clear that the film lacks any kind of emotional punch, mainly due to the absence of a notable back story for the central character. Instead, we just watch as he powers through the film killing uncontrollably and although it is detestable, you never really know how you are supposed to feel about such a faceless man. Oddly enough, it also seems like Yau himself is struggling with the same dilemma and in the final third of the film he places Wong in a predicament where the audience is expected to make up their own minds. Unfortunately, it’s practically impossible to really care at this stage and you are left feeling neither satisfied or sad once the final credits roll.

As is to be expected from a film within this genre, the violence level is fairly high and it is probably part of the reason that it has become so popular.  Throughout the film, Wong butchers his way through numerous victims in suitably grotesque fashions with the added bonus of him hacking them into pieces and serving them up for lunch afterwards.  The gore hounds amongst you will undoubtedly lap this up and the effects are actually surprisingly well done considering the obviously low budget.  However, there are points where I couldn’t help but feel that the film was just looking to instil controversy rather than create a truly artistic piece of work. This seems particularly applicable to an early rape sequence that gets dragged out to the point where it is clearly just looking to shock.

‘The Untold Story’ is an average thriller that is probably more memorable for the violence rather than the tale itself. If you enjoy some bloody mayhem then it’ll definitely suffice, but it’s highly likely that the majority of viewers will find that there just isn’t enough meat in this bun to truly satisfy.