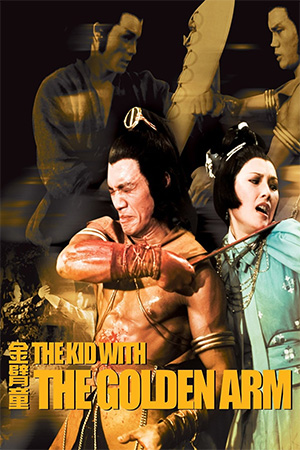 It is with a degree of hesitation that I review this film having only seen the badly cut DVD print. Therefore, all comments that follow are directed towards the version that I’ve seen; the fully uncut print is likely to be a far more comprehensible prospect.

After he’s given the task of transporting a highly sought after cargo of gold to a famine struck area of China, Yang Yu Heng (Sun Chien) gathers together a powerful team to ensure that the mission is successful. Among the hired hands are laconic swordsman Li (Wai Pak) and his devoted girlfriend, wise-cracking axemen Yen and Feng, and the mellow drunken master Hai To (Philip Kwok). As the journey begins, the main threat to the gold becomes apparent in the shape of the the notorious Chi Sah bandit gang. Within this opposing band are formidable foes such as Brass Head, Silver Spear and the renowned Kid With The Golden Arm (Lo Meng). During the numerous encounters between the two sides, sizeable numbers of both sides are waylaid and the heroes in particular find themselves under severe threat. Nonetheless, Hai To continues to support his associates in his own inimitable way, downing large jars of wine as he does so. However, a new threat is rumoured in the shape of the mysterious Iron Feet who is also known to be interested in the cargo. The question on everyone’s lips, though, is who is Iron Feet? It’s left to Hai To to find the answer to this perplexing mystery.

One of the best loved of the Venoms films, ‘The Kid With The Golden Arm’ is firmly lodged in the minds of many kung fu film fans. Re-uniting the talents of all five Venoms with Wai Pak (who was one of the Venoms in the original film), this is a production that relies much on the confidence of its ensemble play. Not as plot driven or character based as ‘Five Venoms’, ‘The Kid With The Golden Arm’ concentrates on the stylish action that dominates its running time. Bouts between the wonderfully varied characters are frequent, though not always consistent in quality. The main highlights in this department are when Philip Kwok is given centre stage, such is his physical ability and immense charm. While there’s no doubt that Chiang Sheng and Lo Meng add their superior imprint on proceedings, Philip Kwok’s role as Hai To is the kind of hero that always stands out in quality genre films. Once again Chang Cheh fashions engaging characters from very humble beginnings, something which few kung fu films can boast. ‘The Kid With The Golden Arm’ is also packed with intriguing villains, not least of which the eponymous Kid played expertly by Lo Meng.

This is the cut version and, as such, suffers from a definite lack of composition. Whatever the aforementioned qualities are, this is still dependent on action scenes without anything to successfully link them. One of the many things that lifts Chang Cheh’s far above the genre norm is his exquisite use of non-action sequences and their gradual shaping of the narrative. By doing this, Cheh always created an anticipation for the next set-piece while the viewer enjoyed some subtle character moulding. ‘The Kid With The Golden Arm’ – perhaps due to the nature of the version reviewed – lacks these classic Chang Cheh touches. Therefore this is not comparable to ‘Killer Army’ or even ‘Five Venoms’ itself. It’s possible that the full print would rectify this problematic weakness. Even in this hackneyed format, ‘The Kid With The Golden Arm’ still has enough to push it into the four star category.