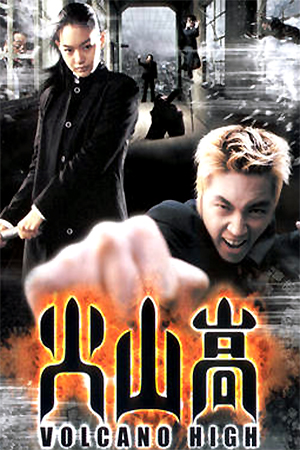 ‘Volcano High’ stirred up quite a bit of controversy upon release, mainly due to its over-reliance on special effects. Having never been a huge fan of CGI heavy productions, I approached the film with a fair amount of trepidation. In the end though, I was pleasantly surprised by what I saw…

Kim Kyung-Soo is a problem child who has been transferred between several schools due to his wreckless behaviour.  When he finds himself relocated to Volcano High, he learns of a secret manuscript that supposedly offers its bearer the chance to rule the world.  And thus, the stage is set for several of the strongest school kids to compete to become the owner of this important document. However, as Kim finds himself drawn deeper into this web of rivalry, he must make the important choice of siding with one of the factions or going after the power for himself.

Clearly inspired by a number of anime shows and video games, ‘Volcano High’ is a Korean production that is primarily about style. The plot is pretty flimsy to say the least, using little more than a basic high school rivalry as the backdrop for several physical confrontations. Although there a couple of confusing moments, this does still generally make for an easy watch and it is aided by the inclusion of a number of bizarrely entertaining and over-the-top characters. It also has to be said that the film benefits from some very pleasing cinematography which really shows off the film’s dark and brooding aesthetic.

When it comes to the action in ‘Volcano High’, it’s all about wire-fu and a handful of special effects. While this is a style that I rarely favour, there is something strangely captivating about the action sequences featured here. I think the main reason is simply because the film is always up front about its characters. We know that they all have superhero-like powers and are capable of unrealistic feats, so you never really question anything and are just able to appreciate the choreography. Of course, it also helps that the direction is solid and we can actually see what’s going on, allowing for a number of exciting and entertaining encounters.

While it may often prioritise style over substance, ‘Volcano High’ still emerges as a pretty enjoyable action flick. It is genuinely fun to watch and, for a change, the special effects actually enhance the action rather than ruin it.