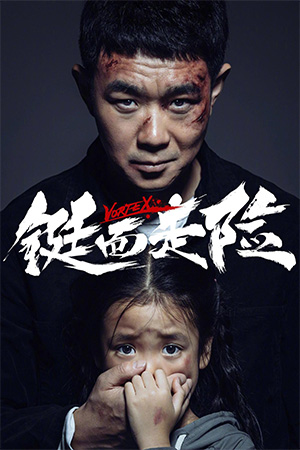 ‘Vortex’ is a remarkably confident debut from director and co-writer Jacky Gan, a searing action thriller about those on the lower rungs of society desperately trying to get their hands on a large sum of cash. Liu Xiaojun (Dong Chengpeng) is a lowly mechanic who has mounted up large debt due to his excessive gambling habits. He’s offered a chance at a large sum of cash by dodgy local car dealer Wang Yong (Cao Weiyu) by stealing unregistered cars and returning them to Wang so he can re-paint and re-sell. However, no sooner has he nicked the first car, than he’s shot at and chased by two crooks (Sha Baoliang, Oho Ou) and finds a kidnapped little girl (Audrey Duo) in the boot of the car. Liu soon discovers the little girl has been kidnapped for ransom by the two criminal brothers, a ransom Liu then decides he will collect for himself which in turn sets off the relentless wrath of the brothers and sucks him into an escalating vortex of violence and despair.

What unfurls is a breathlessly paced and tightly wound chase through the darker areas of the city as Liu desperately tries to outrun the brothers, various other parties who get wind of the ransom, the police and his own growing conscience. While first and foremost an action thriller, ‘Vortex’ is also very much about characters living on the edge of society desperate for a big cash windfall and the consequences that come with their greed and desperation. Liu, while not a perfect human being, is in no way a bad man but due to his own addictions makes several wrong decisions that sets off a chain reaction of violence, double crosses and a desperate struggle to keep his head above water. It also sets the lives of everyone around him and those involved in the kidnapping on unforeseen trajectories as everyone scrambles to either find the girl or get the cash. The narrative is never straightforward, and the twists never signposted as these very human characters desperately try to either set wrong right or delve deeper into violence as their greed takes hold.

Despite the unrelenting tension and darker side of proceedings ‘Vortex’ has heart and a touch of warmth running through it due to the relationship that develops between Liu and the little girl. Never resorting to schmaltz or cliché, the two come to care about one another as their situation becomes ever more extreme. Both Dong Chengpeng and Audrey Rose are incredible in their roles. As is Oho Ou as the relentless younger brother of the two criminals, a ruthless villain who is like the fucking Terminator in his pursuit to track down and end Liu. This leads to several thrilling chase set-pieces throughout the film all grounded with realistic and dangerous looking stunt-work and add to the ever-escalating dangers of the vortex Liu finds himself in.

For the most of its running time ‘Vortex’ is a grounded, dark and blistering thriller that perhaps only pushes credibility come the home stretch when events perhaps start to push the limits of craziness that a human being can survive. However, it’s a minor niggle for a what is a thrillingly staged chase thriller and character study, that is highly recommended. Seek it out.

Our thanks to Fortissimo Films, the sales agent for ‘Vortex’.