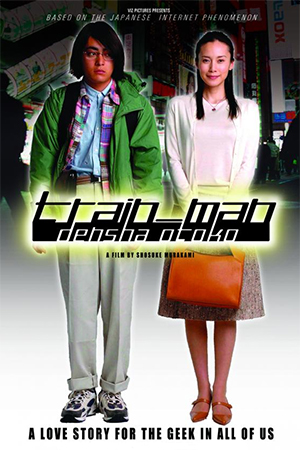 For all those who think modern Japanese cinema is either ultra-violent thrillers or anime, ‘Train Man’ is the perfect tool for re-education. While South Korean cinema has carved out quite a niche for itself with these kind of tender rom-coms, this charming production is proof that Japan can certainly hold its own in this cherished Asian sub-genre.

Timid I.T. worker Tsuyoshi exists in his own cloistered world where computers and anime are more important than real human contact. His only real link to the outside world is his regular visits to a chatroom where his sobriquet is ‘Train Man’ and where he can maintain friendships in a controlled environment. Despite his nervy, almost cowering demeanour makes him practically invisible on the streets of Tokyo, he finds himself reticently coming to the rescue of a damsel in distress on a city train, an act that changes his life forever. Not only do the bystanders applaud his bravery at confronting the drunken brute who is pestering the passengers, but the young woman, Saori, also promises to reward this reluctant hero. Though his online advisors advise him not to take her words too seriously, she does indeed buy him something very special and Tsuyoshi is stunned by her actions. A way out of his self-imposed exile is now offered to him and he plucks up the courage to ask her out to a restaurant. As an unlikely friendship slowly gains momentum, Tsuyoshi realises that he must eventually rely more on his own personality than the counsel of his cyber-friends.

The opening shots of Murakami’s Masanori’s ‘Train Man’ set the ambience for the rest of this progressively rewarding work; the sprawling cityscapes dwarf our hero while he goes about his monotonous daily routine and the busy Tokyo inhabitants rush past him with little interest in his existence. Masanori uses these brief cut scenes to develop our sense of sympathy for Tsuyoshi, but also to show what a pariah he really is – the moment when he is ignored by someone handing out samples of men’s aftershaves is an obvious and yet very effective way of highlighting just how pathetic people view him. Tsuyoshi is also festooned with stereotypical uber-geek clothes and apparel, from long unkempt hair to token anorak. Though these elements are not especially subtle, ‘Train Man’ is never a film that mocks its hero nor uses his eccentricities for cheap laughs. There’s very little doubt as to whose side the director is on.

The beauty of ‘Train Man’ is also, initially, a frustration. The development of the characters is purposeful and as cautious as the gentle lead, while the background players are roughly sketched in the earlier stages. This implies a lack of care on the part of the director and screenwriter, but ‘Train Man’ is a film that requires some patience before the facets under the surface begin to reveal themselves. Such a statement also explains why such an unlikely romance is possible; the two main protagonists are poles apart in terms of personality, but the gradual revelations that emerge make their relationship much more believable.

‘Train Man’s narrative pacing verges on the ponderous at times though it builds to a captivating finale where Tsuyoshi and Saori declared their feelings for one another. This is a predictable generic convention and hardly deviates from the typical rom-com denouement, but the unconventional 80 minutes prior to these grand scenes make the viewer particularly eager to see this outcome. Director Masanori also uses this ebullient ending to remind us how important some of the incidental moments of the story are; this proves to be a master-stroke, superbly delivering a delicate message of how vital the seemingly unimportant moments are in a relationship.

As the narrative unfolds from the eponymous character’s perspective, it takes time for questions to be answered, though even then certain aspects are ignored. Alongside a few examples where the style overcomes the substance, this is the weakest part of an otherwise triumphant production. ‘Train Man’ thrives when the romance is the focal point and begins to struggle when there is too much emphasis on Tsuyoshi lengthy consultations with his allies. Thankfully the film gains confidence in its leading pair as the narrative progresses; the second half of the story is a more introspective and therefore far more touching continuation of earlier themes.

With a genuinely affectionate central romance, a captivating female lead and a hero who is believable, bewildering and ultimately winning, ‘Train Man’ is certainly to be commended. The zany Japanese quirkiness may be over-emphasised at times, but beneath the surface this is a sweetly observed rom-com that delights far more than it exasperates. Few genre productions can take convention and make it appear so fresh and so very appealing – this, perhaps, is the perfect summary of a work that punches well above its weight.