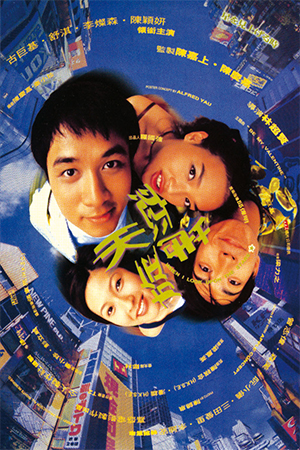 In one of his rare impulsive moments, young designer Kei decides to fly over to Tokyo to see his girlfriend June. The time they’ve spent apart has been helped by their communication through e-mail – or so Kei thinks. On arriving in Japan, he travels to see his betrothed but finds her to be somewhat cold. Totally oblivious to any changes in their relationship, Kei happily continues to shower his girlfriend with the closest thing he knows to affection. Only when he takes her out with his best friend Sam does he discover that the two people he trusted the most are actually in love. Angered and heartbroken, the jilted man finds his life turned upside down and all of his carefully ordered plans ruined. Deep in this period of misery he decides to contemplate his life over a cup of coffee in one of Tokyo’s cafes. While drowning his sorrows with a caffeine fix, Kei meets quirky and bubbly aspiring model Kiki and reluctantly tells her his tale of woe. The ever-cheerful Kiki proposes a novel solution to her new friend’s problem: for twenty-four hours they will have a romantic relationship and enjoy all the joys a normal couple would. The very straight-laced Kei finds the prospect of a fake girlfriend far from encouraging but, feeling he owes something to Kiki, agrees to go along with this. The day-long couple soon find that this is much more than a novelty and that their respective feelings are beginning to be reawakened. When Kei goes back to Hong Kong he is torn between his very brief romance with Kiki and whatever normality he once had; will the designer who prides himself on logic follow his head or his heart?

After proving his worth with action films like ‘Option Zero’ and the award-winning thriller ‘Beast Cops’, director Dante Lam showed audiences his softer side with this romantic drama. Aside from its failings, ‘When I Look Upon The Stars’ is an interesting sign of Lam’s determination not to be pigeon-holed in one genre. The various inadequacies of this production will be mentioned later, but first there’s definite reason to applaud the film’s cumulative effect. Leo Koo is not given a very magnetic character to play, but succeeds in drawing out Kei’s eventual qualities; by the end the audience almost forgets how cold he initially was. As Kei’s treacherous friend, Sam Lee manages to once again give indication of the kind of star quality he undoubtedly has. Even in a slightly unsympathetic role, Lee is watchable and makes sure that his kooky image is done no harm. Unusually though, the real praise for most of the strengths is Shu Qi who plays Kiki with real aplomb. With her dreaded Cat-III image long since shaken off, films like ‘The Storm Riders’ and this have given her a chance to show how charming she can be. Oozing a confidence and cheeriness that makes her a pleasure to watch, Shu Qi can be rightfully proud of her work in this film.

It’s certainly not all good news about ‘When I Look Upon The Stars’ as there are some frustrating moments that nearly ruin all its qualities. Sadly many of these must be placed on Dante Lam’s shoulders, though understanding that he was still learning his craft. One major annoyance is Lam’s need to drag out every cheap stylistic trick in the book; the viewer is presented with slow-mo, constant freeze frame and even monochrome. These devices seem to be thrown in for no particular reason and they only highlight the director’s uncertainty when used so clumsily. ‘Jiang Hu – The Triad Zone’ was evidence that Lam managed to forge his own cinematic language soon after, but here he undoes some of the success he’d achieved in the film. ‘When I Look Upon The Stars’ is mercilessly padded in many areas and there are constant moments when the narrative almost grinds to a halt. These attacks on the film are not intended to undermine it all as it is still a very enjoyable romantic drama. There are some touching scenes here that are very well designed by Dante Lam. Importantly though this doesn’t quite excuse the overall inconsistencies.