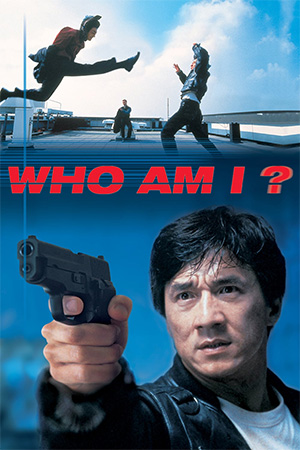 Lee (Chan) is a member of an elite commando unit that is sent deep into the heart of South Africa for a secret mission.  When his platoon comes under attack, he is thrown from a helicopter and assumed dead.  Unbeknownst to his colleagues though, he survives the fall with serious head injuries and is treated by a friendly native tribe.  Unfortunately, his recovery is not as complete as he would have liked and Lee finds himself with no recollection of his identity.  His only option is to return to civilisation and hope that someone or something will trigger his memories.  However, he soon discovers that he is a highly sought after man with assailants attacking him at every corner.  Will he ever rediscover his memories or will he wind up as just another John Doe in the morgue?

‘Who Am I?’ is an internationally flavoured Jackie Chan movie that is set in very much the same mould as movies like ‘Rumble In The Bronx’, ‘Mr. Nice Guy’ and ‘First Strike’. While this means that it is not the all-out fight-fest that many fans may be hoping for, it does still make for an extremely entertaining adventure thanks to a suitably original premise and yet another energetic leading performance from Chan. The other Chan, Benny, also does a very solid job in the director’s chair, keeping everything moving at a rip-roaring pace and creating plenty of tension as our hero fights for his life. Of course, there are still a few minor blips along the way, mainly thanks to the rather ropey Western actors, but they aren’t enough to derail the production and the focus always remains firmly on Chan’s impressive antics. Speaking of which, there are a number of well choreographed action scenes on display, with the highlight being a welcome return to the fighting finale that sees Chan going toe-to-toe with Ron Smoorenburg and Kwan Yung.

‘Who Am I?’ may not be the ‘Drunken Master 2’ successor that many fans are searching for (in vain), but it does still contain plenty of top notch action and enough enjoyable Chan-isms to make it well worth a watch.