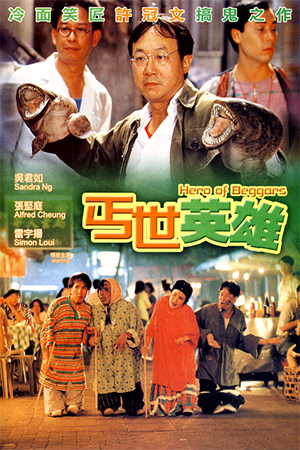 It’s almost a waste of a sentence to recall just how pivotal Michael Hui was to Hong Kong cinema, but with the re-release of this hitherto under-appreciated film, it’s probably worth the boring repetition. As Hui returned to the screen last year with a fine cameo in ‘Fantasia’ and a leading role in the woefully mundane ‘Three Of A Kind’, the legendary comic is reaching a new audience, a fact that may have persuaded Universe to remaster this enjoyable caper.

Ma Wai (Hui), Chief Commander of the Chinese People’s Liberation Army, enjoys his relative authority over the five members of his small squadron. Despite his glowing reputation though, Wai is made redundant when the military cuts its budget and the proud commander and his underlings are sent back to their home village. Frustrated by the downturn in status, Ma dreams of saving up his funds to open a racecourse in the region, though while he works in the stable this seems unlikely. When Ma’s cousin visits from Canton and makes no secret of the wealth he has accumulated while away, the former military chief decides to seek his fortune with his amiable band of ex-soldiers. On arriving in Canton though, Ma is dismayed to find that his affluent cousin has made his money through gun smuggling, a crime that carries the death penalty. Although Ma escapes this punishment, he is still relieved of his money and left to roam Canton without a cent to his name. As he and his former underlings use their wiles to scrape together a living, the money begins to trickle in and a local crime boss (Chan Hui Man) takes notice of their ingenuity. When the slimey triad chief offers the put-upon workers a chance to join his gang, Ma finds his tenuous authority over his troops finally stretched beyond breaking point.

While newcomers to Hui’s body of work may not fully appreciate what’s on offer in ‘Hero Of The Beggars’, those initiated in his brand of mirth may find plenty to savour here. Surrounded by a cast of familiar comedy performers, Michael Hui shows his subtle balance of grumpy curmudgeon and good-hearted soul to an impressive degree; the material here is infinitely more appropriate to his particular skills than Joe Ma’s ‘Three Of A Kind’ was, even in its less appealing moments. The trademark dead-pan humour, stone-faced slapstick and carefully constructed touches of surrealism all add up to the expected Hui performance – assured and in total control of the screen every time he appears.

Michael Hui’s comedies have always tried to retain a social undercurrent that elevates them above a typical Hong Kong comedy, a feature that is present here once again. If anything, though, ‘Hero Of The Beggars’ is occasionally a tad too bleak and unrelenting in it’s dystopian view of China and Hong Kong. The portrayal of the Chinese people, those from Canton and the Hong Kong residents are all distinct though hardly flattering. The Chinese are bureaucratic, the Cantonese are money-grabbing and the Hongkies are manipulative, hardly a great advertisement for either group. That said, at least such characterisations are more balanced than the usual vision of the Chinese mainlanders being so unrefined as to be oafish.

Despite a fairly miserable series of events befalling our heroes and a few off-colour comic routines that are unworthy of Hui’s reputation, Anthony Chan proves himself to be a director who fully understands his star. As with Philip Chan (‘Chocolate Inspector’), Anthony Chan has the confidence to know how much time should be afforded to each comic interlude. Though there are no classic moments, the director is nevertheless able to squeeze ample mirth from even the most potentially depressing episode. Chan also knows when certain scenes are dragging on too long and keeps the pace moving at a steady speed, a lesson that quite a few aspiring directors could take on board.

‘Hero Of The Beggars’ is not a patch on ‘Security Unlimited’ or the many other classic Michael Hui hits, but it still achieves its simple edict of entertaining the audience. Whether he’s fighting Chan Hui Man with a pair of fish heads on his hands (!?) or just brow-beating his underlings, Michael Hui is a performer who shines in nearly every production. Add to his abilities such seasoned performers as Sandra Ng, Alfred Cheung and the aforementioned Chan Hui Man and ‘Hero Of The Beggars’ becomes a comedy that rarely stalls. It is, therefore, a worthy purchase.