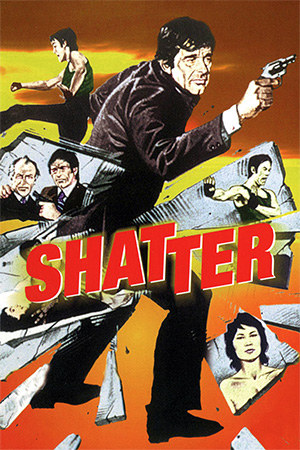 ‘Shatter’ was the second and last Hammer/Shaw Brothers co-production. Unlike ‘Legend of the 7 Golden Vampires’, the first of the two studio’s collaborations, ‘Shatter’ was a modern day affair. The production was plagued with problems as director Monte Hellman left the production after three weeks, and he had only completed half the picture. The producer Michael Carreras took over as director but took a further six months to complete the film. Hellman was asked to edit the final version but declined, had his name removed from the production completely and wanted no more involvement in the picture.

An assassin who goes by the name Shatter (Stuart Whitman) carries out a hit on an African dictator. However when he lands in Hong Kong to collect his payment, it becomes apparent that he is a marked man. International banker Hans Leber (Anton Diffring) whom Shatter believes himself to have been contracted by, turns him away telling him that he did not issue the contract. As well as having other hitmen after him, British government agent Paul Rattwood (Peter Cushing) is also on his case. After getting beaten up by Rattwood’s heavy’s, bystander Tai Pah (Ti Lung) takes him under his wing. Shatter eventually discovers that the hit he carried out had nothing to do with politics like he had been led to believe  and was all about the dictator terminating his opium business with the crime syndicate, whom employed Hans Leber as their international banker. Under the realisation that he is black listed and can never work as a hitman again, Shatter  decides to sell a list of secret European opium laboratories he had acquired back to the syndicate. He offers half of his potential spoils to Tai Pah in return for keeping him alive. The syndicate isn’t happy about giving up $1 million though.

‘Shatter’ ran into many problems during production and this is evident in the finished product. Even though Hellman apparently shot less than half the film by the time he departed, by his own admission the footage he shot made up as much as two thirds of the final edit, including footage he originally intended to leave on the cutting room floor. The result is a film that doesn’t go anywhere very fast which is not helped by a script already lacking in sufficient content to successfully create a 90 minute feature.

Stuart Whitman is woefully miscast as the contract killer. His performance is poor to say the least, which is only amplified when juxtaposed with that of Peter Cushing whose presence is one of the few saving graces of the film. Asides from Peter Cushing perhaps the only other saving grace of the film is Ti Lung. Although his English is not as good as David Chiang, his performance is easily the second best of the film though this may not be saying much as all other performances remain pretty poor.

Being a Shaw Brothers co-production you might expect the action to be the real star of the film. The problem is that it is also a Hammer film, made by a director and producer who have no interest in martial arts. The Kung Fu on show is added purely to cash in on the popularity created in the West by Bruce Lee before his untimely demise. The action, while adequate, is constantly punctuated by close ups of Whitman amongst others, which ruins the fluidity hence spoiling them.

‘Shatter’ seems to be nothing more than mere exploitation of the Kung Fu genre. A tactic which fell flat on it’s face as it flopped on release. If you like seventies cheese then you might want to pick this one up. Otherwise it’s probably best to avoid unless you happen to be a hardcore Shaw Brothers or Ti Lung fan. If the idea of a Hammer/Shaw Brothers co-production intrigues you then you would be far better served picking up a copy of ‘Legend of the 7 Golden Vampires’.