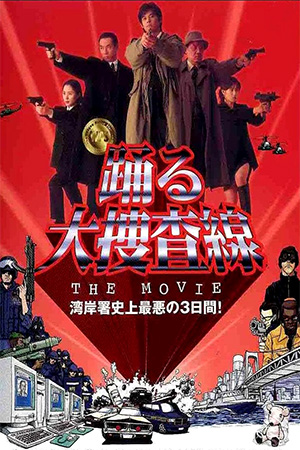 The hit Japanese series made its way to the big screen in 1998, reuniting the cast and crew in what turned out to be a massive box-office smash. Fortunately familiarity with the television series is not a precursor to watching this big screen transfer, though some appreciation for dry local satire may be advantageous.

Detective Shunsaku Aoshima (Oda) returns to his old Tokyo precinct of Wangan after a previous demotion due to supposed insubordination. On returning he finds that the absurd bureaucracy, red tape and supercilious superiors remain in place, hampering any chance of quick resolution to the city’s crime. When the assistant commissioner of the metropolitan area is kidnapped, a task force is organised that pushes aside the ordinary policemen like Aoshima and his colleagues in favour of a secretive special force. Yet the Wangan regulars have a much greater understanding of the area than the hi-tech interlopers and begin to piece together their own investigation.

‘Bayside Shakedown’ starts as it means to go on, setting it’s tone with a scene of a body being discovered  and two police precincts arguing over who should fill out the paper work. In so doing, the film-makers try to sidestep the obvious disadvantage first time viewers might have compared to those who loved the television series. This, coupled with an energetic introduction to the main protagonists, helps alleviate any worries about knowledge of the source material.

There are some excellent comic touches to savour in this first big screen instalment. An early highlight has a committee having intense discussions about what to call the team investigating the kidnapping and how the striking the sign on the door should be. Such bone-dry absurdism is exactly what separated the ‘Bayside Shakedown’ series from the plethora of police procedurals, that refined touch of satire that became its trademark.

As the narrative switches to the actual investigation and follows the formula of a police drama, ‘Bayside Shakedown’ losses that edge. The storyline doesn’t possess the needed tension to clear this hurdle and this is the one occasion where an appreciation of the series and the characters’ relationships established throughout it are just about vital. Nevertheless, as an introduction to the lunacy of Wangan precinct and Japanese protocol in general, ‘Bayside Shakedown’ more than holds the attention with its zesty pace and attempts to do things a little differently.