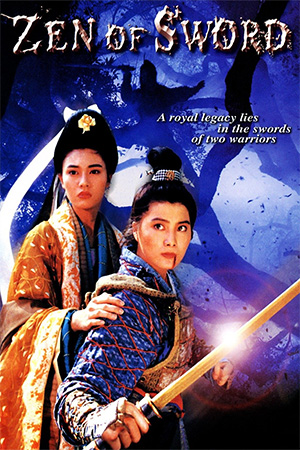 Cynthia Khan cemented her name as the replacement for Michelle Khan and starred in a number of modern day action fests including the Yuen Woo Ping classics ‘In the Line of Duty 4:Witness’ and ‘Tiger Cage2’, more or less playing the same character. However after D&B films went out of business Cynthia took a change of direction to star in this new wave swordplay film sometimes described as the follow up to the King Hu  classic ‘A Touch of Zen’. In the same year Khan also starred in another new wave swordplay film ’13 Cold Blooded Eagles’ and ‘Deadend of Besiegers’ in which she got to showcase a more traditional style of martial arts.

Khan however shares the top billing with the 1989 Champion of Miss Hong Kong Beauty Pageant Michelle Reis (sometimes credited as Michelle Li, she is a native of Macao with Portuguese extraction ). By this time Reis had already become used to the new wave swordplay genre as she had already starred in the classics ‘A Chinese Ghost Story II’ and ‘Swordsman II’ . ‘Zen of Sword’ while not being up to the standard of the two aforementioned films, is still a worthy addition to the collection of new wave swordplay fans.

The story is set in the dark age of Chinese history where the Duke’s fought each other for money and power, righteousness and morality are in decline. Princess Choi Siu Ling (Michelle Reis) with her two Generals Choi Siu Ching (Cynthia Khan) and Lau Qun Hung (Waise Lee) are on the run from the Esoteric Buddhism School (who covet the jade pipe Princess Choi is carrying which contains mystical powers which will allow them to recruit soldiers to take the kingdom, and also to take revenge on the clan responsible for the evils against their own). During a battle Qun Hung is captured and tortured. When Princess Choi is bitten by a snake, she is rescued by the Prince of the Esoteric Buddhism School Ha Hou (Lau Suen), who then becomes enchanted by her. General Lau, now in league with Ha Hou’s Aunt (Hui Ying Hung), then returns to steal the jade pipe but leaves with only a fake. The loyal General Choi, having been separated from the Princess, enlists the help of the God of War (Kuo Chui), and together they rescue the Princess who has since been kidnapped by Ha Hou’s Aunt. When they all meet up with the Governor Tak Hong (Lau Siu Ming), a plot ensues where the God of War is poisoned so that the Princess is vulnerable. We are now treated to a number of plot twists in which General Lau and Governor Tak try to obtain the jade pipe. Meanwhile Ha Hou discovers that Choi Siu Ling is Princess of the clan responsible for the massacre of his own, and is now hell bent on taking revenge.

‘Zen of Sword’ has plenty of plot twists, but not so much as to make it convoluted. Performances are good, and the action handled primarily by Kuo Chui pleases. As mentioned before it is not among the elite of new wave swordplay films, but however remains solid despite the modest budget. If you enjoy the likes of ‘New Dragon Gate Inn’ or ‘Swordsman’ then this comes highly recommended.