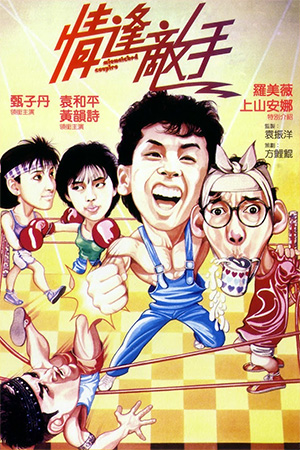 My long wait to see this intriguing 80s action comedy was finally ended recently (thanks Pete!) as I finally received a VCD of it and sat back not quite knowing what to expect. It’s reasonable to say that, although the film is another teaming of Yuen Woo Ping and Donnie Yen, it isn’t a film that is mentioned too often.

Eddie (Donnie Yen) is an athletic breakdancer who boasts his skills among the youths of 80s Hong Kong. Living with his older sister and young cousin (May Law), Eddie’s one dream is to impress the glamorous girl he constantly meets at social events. During one of his aimless escapades, the confident young hero meets a hawker, Mini (Yuen Woo Ping), whose livelihood is taken away by the police. Eddie feels obliged to help Mini out and decides to smuggle him into the family home and see how long he can stay without being detected. Mini is quickly discovered, though, and Eddie and his cousin literally beg his older sister for lenience. The older sister finally agrees and also finds work for Mini at her restaurant. With these unusual quartet sharing the home, there are inevitably a few complications and even a crush or two. However, Eddie soon has a more pressing problem to deal with when his physical skills are noticed by a determined, yet slightly unhinged fighter (Dick Wei) who is desperately seeking a challenge. Therefore he tries his best to avoid a conflict with the obsessive fighter, but finds himself finally forced into a showdown.

With crazy fashions, cheesy synth-pop and all of the fads of its time, ‘Mismatched Couples’ is very much a product of its era. Looking back on it from the 21st century is a strange mixture of curiosity and embarrassment – much as the current trend of retro-television creates the same feelings. For anyone who is naturally cautious about such a film, the good news is that, despite some of its unintentional hilarity, ‘Mismatched Couples’ is great fun. Combining the well-worn, but equally well-loved 80s Hong Kong comedy with the kind of eye-popping action that was a part of those glorious days, this production manages to pack plenty of entertainment into its running time. Viewing the film from a contemporary perspective manages to elicit an unusual feeling of melancholy also; just the knowledge that action like this is unlikely to be seen again is a bitter pill to swallow. Donnie Yen takes on a role similar to the one he played in ‘Drunken Tai Chi’ and once again shows how effortless it is for him to combine incredible physical aptitude with a pleasing screen persona. The rest of the cast is packed with familiar faces and performers who immediately signify the 80s, though Yuen Woo Ping’s appearance in one of the lead role is a pleasant surprise. ‘Mismatched Couples’ lacks depth and a cohesive plot; the intention here is to combine scenes of slapstick with the must-see breakdance/kung fu sequences. Nonetheless, it still passes the time very nicely with the end fight between Donnie Yen and the wonderfully unhinged Dick Wei being a major highlight.