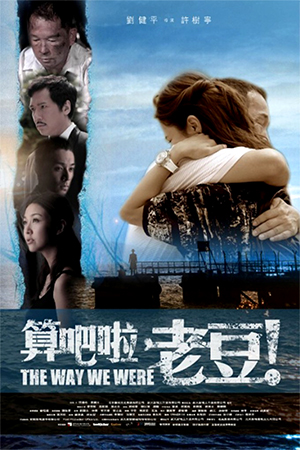 Liu Kai-Chi is one of those actors who seems to be woven into the very fabric of Hong Kong cinema. A character actor who seems to have appeared in every film to come from his home territory of late, Liu is an Asian John Turturro or William H Macy, a performer who emerges from the background to dominate scenes. ‘The Way We Were’ is an overdue chance for Liu Kai-Chi to headline a film, but ‘Barton Fink’ this isn’t.

Former actor Cheong Kwai appeared in the classic series ‘The Bund’ twenty years ago, but burnt his bridges in the industry soon after. While living on past glories for two decades since he has alienated his wife who has long since left and missed out on his daughters formative years, leaving his relationship with her especially delicate. An unusual hostage situation sees this serial nobody turned into a national hero and an unlikely opportunity to remake ‘The Bund’ in his own image emerges. Yet his obsession with what might have been threatens to permanently severe his bonds with his child.

‘The Way We Were’ starts with a well-observed parody of ‘The Bund’, full of heart-wrenching melodrama and heroic bloodshed. It almost seems as if this witty introduction will herald in a film that can mix family drama with a noticeable dose of surrealism and dollop of satire. As it transpires though, ‘The Way We Were’ is a clever first five minutes with a ponderous 100 minute iceberg of indifference emerging just behind it. The father/daughter dynamic is dangled throughout like a dramatic carrot for us to hanker after while the story becomes criminally unfocused.

When executed well, Hong Kong drama still has a down-to-earth heart that contrasts beautifully with the high-rise glitz of the city. At their best they attain a style unique to the territory, completely independent of the rest of the continents output, somewhat akin to British kitchen-sink cinema. ‘The Way We Were’ just doesn’t know what its heritage is and squanders a good concept for needless in-jokes while Liu Kai-Chi deserves a much stronger vehicle and Fiona Sit is woefully underused. Do not confuse this with Ann Hui’s excellent ‘The Way We Are’ because this is a very different and greatly disappointing offering.