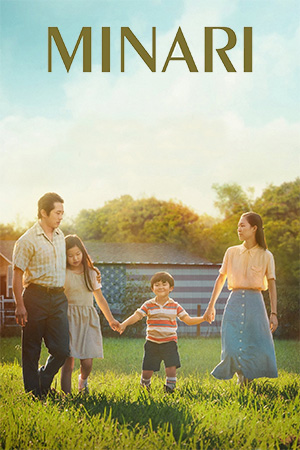 Something strange happened. In an industry that is now favouring the most divisive and agenda-driven entertainment, somehow, an utterly delightful film broke through the incondite barrier. And that film has, somehow, been showered with critical acclaim and actually deserves it – it’s almost as if quality storytelling, characterisation and positivity have made a strange comeback due to a temporary glitch in the continuum. ‘Minari’ is a captivating and splendid production that deserves the acclaim being showered on it.

Korean immigrant Jacob (Yeun) has moved to Arkansas to pursue his dream of building a farm, bringing a reluctant wife and two young children with him. Having worked in the poultry industry for many years – and having to continue the work while he cultivates the land – Jacob hopes that producing Korean vegetables for the burgeoning population of Koreans in the area is a way out of the dismal work he is condemned to. Though his wife, Monica, is far from happy, she supports his wishes and tries to assist by bringing in a wage too. Yet the problems mount when the land proves harder to tame than Jacob had thought and he reluctantly hires eccentric local Paul (Patton) to assist. Things are further complicated when Monica’s mother comes to live with the family and babysit the two children while the parents are at work; this card-playing, foul-mouthed old woman is quite the opposite of the cookie-making grandmothers that the two are used to though.

I had strange flashes of other fine films and even some experiences while I watched ‘Minari’. I thought of the pastoral elegance of ‘Days of Heaven’, then the inherent positivity in ‘A Trip To Bountiful’ and lastly, my own grandparents, who moved to England from post-war Poland. The last point was particularly poignant; people with unusual customs coming to a land with other unusual customs, working their way up from resettlement camps and, finally, hoping to find that little taste of home somewhere. That is the beauty of ‘Minari’ – it talks to so many cultures. It is never a parochial piece on Korean immigrants. It’s not even just a film for offspring of immigrants who remember their family’s struggles. ‘Minari’ is a film that has much loftier, unifying ambitions, namely that, despite all of the mainstream media’s obsession with division, most people seek harmony and safety for their family.

That above paragraph could make Lee Isaac Chung’s masterpiece sound like a heavy-handed piece as per so much of what is produced today, yet it is the kind of genuinely powerful and reassuring piece of cinema that should be cherished by all. Like ‘A Trip To Bountiful’, the story is essentially about what weaves people together and because of that, it is especially important. I kept hoping for the film to end in that way I do when I am having such a good time and am fearful that something terrible is going to happen and ruin the whole experience – there’s nothing quite as heart-breaking as investing so much in a movie only to have your legs kicked away halfway through! ‘Minari’ is as good in its final minutes as in its lovingly shot opening ones.

‘Minari’ is beautifully shot – Terence Malik would be proud – and directed with such assuredness that you quickly realise that you are watching something special. That, of course, gets you so far – without expert writing and performances, everything can quickly be undermined. Yet, once again, Lee Isaac Chung’s film wows; as writer, Chung draws on his own life experiences in such a universal way that it will appeal to many of us. I felt uplifted and yet strangely melancholic watching David, the youngest child, trying to understand the language and unusual potions of his grandmother – it brought me back to summers as a child spent with my other grandmother who would come from then communist Czechoslovakia to look after me. All of those things you had to eat and drink when all you want to do is quaff 7Up and eat a Big Mac! I digress – that’s the effect that ‘Minari’ has on the viewer – and should return to the crowning glory of the film, namely the performances. Steven Yeun is superb as stubborn, yet loving father Jacob and continues to show his versatility as an actor while Han Ye-Ri is equal to him as the wife who goes through privation for the sake of her family. A special mention, however, goes to two veterans from two very different film industries. Youn Yuh-Jung is stunning as the unconventional grandmother while the greatly underappreciated Will Patton steals large portions of the scenes he is in.

‘Minari’ has been described as ‘The Film We Need Now’ according to one reviewer. Perhaps it is. Perhaps we just need more meditative, thoughtful films that join people of different cultures together a bit – and not in the ‘diversity by committee’ way that so much media is engulfed by today. Perhaps we just require films that are as stunningly shot and performed as ‘Minari’. Whatever its reason for being, ‘Minari’ is something to truly cherish.

‘Minari’ will be available on demand from Altitude Films on April 2, in drive-in cinemas from April 12, and across UK and Irish cinemas as they open.