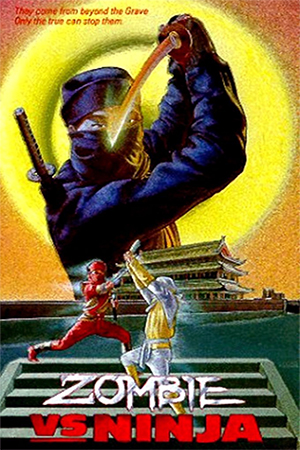 A small, remote village is being terrorised by a gang of vicious thieves who leave their victims for dead. When one particular family is attacked, the father is killed while the young son, Ethan is left badly beaten. Luckily, he is found by a friendly undertaker who gives him a job and agrees to help train him in the art of kung fu. Meanwhile, an American ninja by the name of Dragon is also fighting against the thieves and their group of ninja henchmen. When he hears of Ethan’s plight, he secretly instructs the undertaker on techniques for training in the hope that together they can take down the thieves once and for all.

Despite the rather intriguing title, this typical cut and paste job from IFD is not quite the mesmerising match up that you may expect. Although it does indeed feature both zombies and ninjas, the two parties never actually meet or participate in any bouts of combat. Thankfully though, the main story more than makes up for this as it exhibits a typically wacky and very entertaining old school kung fu movie concept that is complimented by some dodgy sound effects and laughably bad English dubbing. This being an IFD outing, it does of course also include the usual quota of Western ninja antics, although it has to be said that this time around their presence feels somewhat unnecessary and you get the distinct feeling that they were only inserted as a marketing tool.

In the action department, ‘Zombie Vs. Ninja’ also emerges as a fairly positive effort with several competently choreographed fight scenes. The majority of these stem from the kung fu movie segments, which open with your usual handful of comedic combat before the hero actually learns to fight. Although it’s fair to say they these scenes can’t compare to the elites of the genre, there are still a number of solid duels that feature some impressive bootwork and acrobatics. Special mention must also go to the ingenious zombie style of kung fu, which basically sees our hero moving around robotically to dodge and strike his opponent. As with the story side, there are also a few ninja fights mixed in but sadly they fail to push any of the boundaries and are so short lived that they aren’t really worth mentioning.

‘Zombie Vs. Ninja’ is a cut above a lot of other IFD outings, simply because it steals an abundance of footage from a half decent kung fu movie (‘The Undertaker In Sohwa Province’). The only real letdown is the inclusion of the ninjas because they feel completely unnecessary and out of place. Still, if you are already accustomed to the IFD style of filmmaking then it’s likely you’ll find plenty to appreciate.