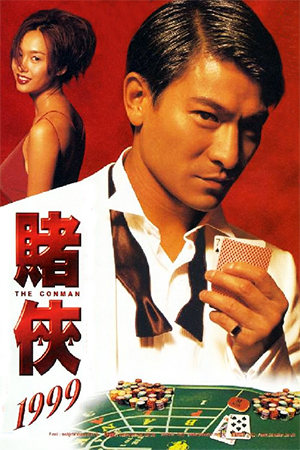 King (Lau) is a master conman who has little respect for the business he is in and even less respect for his wife.  When a card game goes seriously wrong King kills a man and is left colour blind in the process.  He is imprisoned for five years without knowing what has become of his family.  When he is released he is met by Skinny Dragon (Nick Cheung) who is sent by an old friend to look after him.  King’s only thoughts are of finding his wife but he decides to help Dragon by teaching him some tricks while he pursues his search.  Dragon’s sister Ching (Athena Chu) takes the two friends in and begins to fall for King without even realising it but he seems intent on rekindling his previous relationship.  When they run into Macau Mon, one of the greatest conmen of all time, they are drawn into a plot to kill him and King must place his life on the line to play one last game that could be his last ever.

Director Wong Jing continues to milk his ‘God Of Gamblers’ franchise with this modernised retelling of the original story. This time around, Andy Lau takes on the role of the master gambler while Nick Cheung is bought on board as the “wacky” sidekick. Unlike Jing’s timeless classic however, this is a fairly bland and unnecessarily comedic update that contains a number of tacky and pointless plot devices.  For example, what is the point in King’s colour blindness? It adds nothing to the story and its only real purpose seems to be to allow Jing to shoot a couple of scenes in “classy” black and white. Then there’s the ending, which turns the story into more of a farce as Jing himself pops up in a cameo to get the gang out of a sticky situation. Lastly, but by no means least, there’s the awful soundtrack.  Made up of a number of upbeat ditties, it completely ruins the mood in every scene and removes any hope the film had of providing an emotional punch.

When it comes to Jing’s directorial talents, they are even more of mixed bag than usual here. In a vain attempt to appear better than he actually is, Jing attempts to emulate Wong Kar-Wai with an excess of sweeping, blurred shots and quick cuts. Unfortunately, this is used so regularly that it quickly becomes annoying and completely ruins all of the film’s action scenes. Another noticeable irritation is Jing’s typical shock factor tactics, whereby he insists on throwing in a graphically violent twist to force his hero into taking the road to success.  As usual, the big twist here is really unnecessary and certainly doesn’t sit right in what is a supposed comedy/adventure film.

As for the film’s good points, the acting is certainly passable. Andy Lau pulls off his usual strong yet silent type to great effect and Athena Chu, although lacking real substance in her role, is fairly easy on the eye.  Nick Cheung also works quite well as the comic relief while Waise Lee gets little more than an extended cameo as the sadistic bad guy. There are also a couple of scenes where either the comedy or drama do hit home, but it’s always apparent that the film is just trying to pull itself in too many directions. Perhaps if you separated the multitude of genres, you could have a couple of decent films but mixed together this way it never really seems to gel.

Despite Jing’s attempts to prove otherwise, ‘The Conman’ is really little more than a second rate attempt at remaking ‘God of Gamblers’.  Perhaps someday that could be a film worth watching, but sadly today isn’t that day. ‘The Conman’ is just far too sloppily put together and cringeworthy to even come close to the original.