While 2005 will be the year of ‘Star Wars’ those truly in the know about cinema are getting excited about a totally different kind of Thai-fighter. On Tuesday 10th May I was fortunate enough to attend the premiere of ‘Ong Bak‘ at Leicester Square’s Empire cinema.

Although we were packed into the relatively tiny Empire 2 screen, where the poor seating meant peering around heads to read the subtitles, the atmosphere crackled with energy by the time the credits crawled.  We had all seen martial arts films, but we hadn’t seen martial arts done quite like this in a long time.  It looked like the real deal, it looked risky and raw and left you ragged.

Later at the aftershow party (tough life I know) I caught up with Debbie Rowland, marketing officer for distributor Contender Entertainment, who kindly agreed to an impromptu interview to wax lyrical about a film she and Contender have high hopes for.

Rob Daniel: Could you quickly introduce yourself?

Debbie Rowland: My name’s Debbie and I look after the theatrical marketing for Contender Entertainment.

DR: I think it was pretty obvious, you just watch the film and it’s like the same magic you felt the first time you saw Bruce Lee, it was that kind of impact.  The guy (Tony Jaa) was just breathtaking, no CGI, no stunt doubles, he was doing it and he was doing it for real.  It takes your breath away. 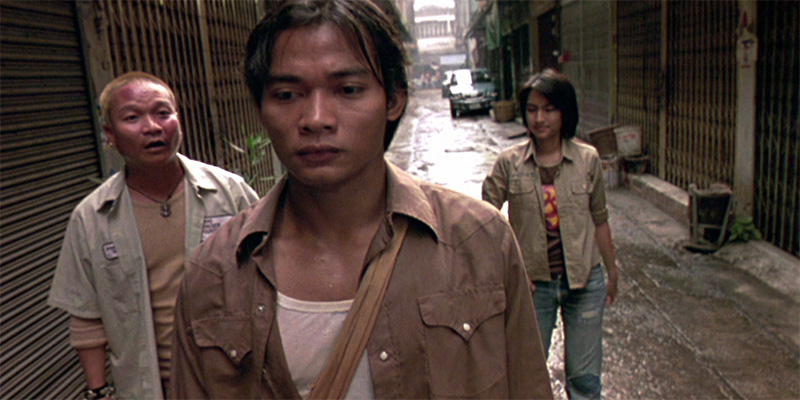 RD: You’ve chosen to give this film a wide release.  What is it’s appeal to the average moviegoer, not a martial arts movie fan?

DR: I think your average moviegoer now is very used to special effects and CGI plays a massive part in today’s movies, and to be honest I think it takes away the realism of the films.  I think a lot of people are bored with that.  ‘Crouching Tiger, Hidden Dragon‘ introduced wirework to a mass audience, which was great, but now you get similar films in close succession and I think people will be attracted to ‘Ong Bak’ because it’s real, it’s hard-hitting.  And you saw from the audience today it gets a physical reaction, people gasping and going “Owww!” and “Ooohhh!” and I think that’s priceless as a shared experience.

RD:  I’ve seen it advertised heavily on buses in London, but what kind of marketing have you done across the country?

DR:  I think one of the key things with the marketing is that we wanted to appeal to the people who liked, for example, ‘Fight Club’, which had the same kind of raw qualities that ‘Ong Bak’ has.  But we also recognized that for a lot of cinema-going couples it’s often the lady who makes the decision to go and see a film or not, so we had two tasks to appeal to young men who wanted the fight action but also to the women who looked for a bit more story, a bit more feeling, or a bit more emotion.  And obviously one of our objectives at Contender was to make it as mass market as possible, so we’ve done buses, underground posters, TV advertising and a lot of print advertising.  For the first time with one of our theatrical releases we’ve used the internet quite substantially as well: we’ve got a dedicated website and we’ve worked with My Movies.net to do the trailer and web advertising to really reach the young male market. 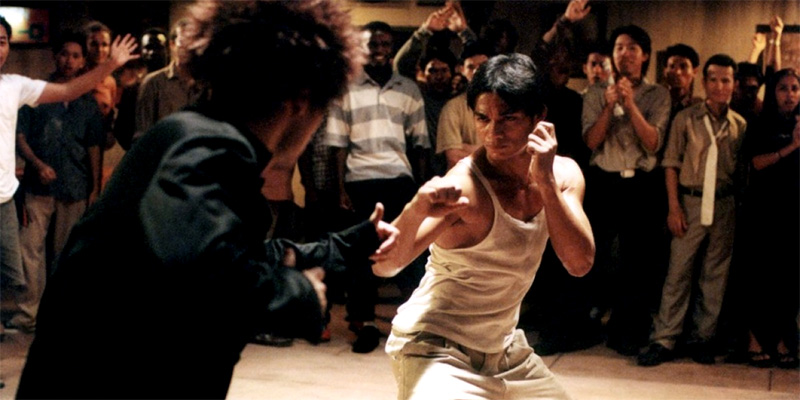 RD: Were you able to get Tony Jaa over?

DR: Tony Jaa is actually in Cannes at the moment, so that was one of the reason he couldn’t make it here and he’s also filming his next film ‘Tom Yum Goong‘, which Contender also has the rights to.  “Tom Yum Goong” is Thai for “the bronze suit” I believe, and you can expect even better cinematography, a bigger budget and ‘Ong Bak’ on a bigger scale.  I think we’re looking early next year for a theatrical release for that.

RD: Why did you change the film’s score?

DR: The original music was good, but repetitive we felt, and there is a good story to ‘Ong Bak’ but we felt it needed enhancing more.  We wanted to emphasize certain characters more such as Ting and the bad guys and we could do that with the music.  A lot of the action sequences are long, and fantastic, and we felt the original score could have done more to build people up.

DR: Actually we’ve done Dolby Digital EX for this as we felt the film really deserved this treatment. 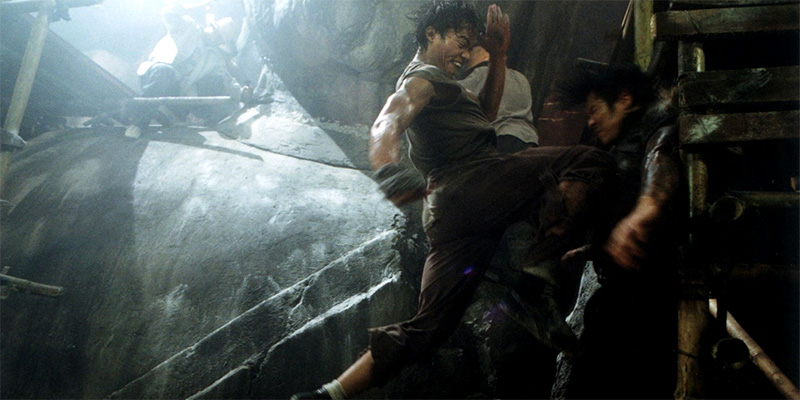 RD: What was the relationship with the filmmakers regarding the re-scoring?

DR: We spoke to them extensively and explained for our audience we wanted to make it more mass market, so the music would play an important part in marketing it as a blockbuster to rival Hollywood.  So they were consulted throughout, and we were very true to the Thai tradition, we used Thai hornplayers for example, so the music is modern and has all that emotional impact, but we’ve stayed true to Thai culture and the spiritual part of the film.

RD:  How wide is the launch?

DR: Well, we did the original ‘Ju-On: The Grudge‘, and that was 24 prints.  So with this we originally thought 24, 25 and then the exhibitors saw it and it went to 50, which was great!  Then with how we marketed it, sending out the key-art to the exhibitors and so on, it went up to 73 and we’re now on 87 prints.  So we’re hoping for a good first weekend.  We’ve almost deliberately gone up against ‘Star Wars’, saying this is like the anti-‘Star Wars’, giving people something totally different, so we hope that works.

RD: Who came up with the “No Strings Attached” campaign?

DR: That was inherited as a tagline from the US, but we’ve tried to make it broader for the wider audience, just telling them to believe the hype. 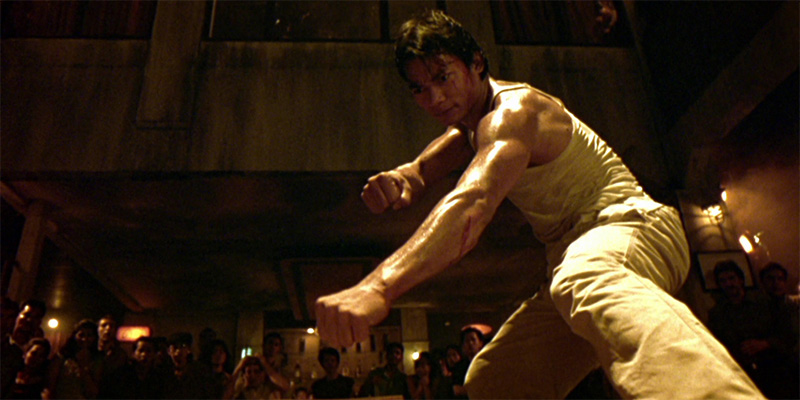 RD: And Tony Jaa is “guy candy” for the ladies…

DR: Yes, isn’t he?  I’ve had to look at a lot of hi-res images of him in various poses, which was hard work.  But, there have been lots of comparisons with Bruce Lee and Jet Li, in that he has the skill and the courage but also the charisma as well. Something that other territories didn’t do was show the internal struggle, which gives the guys the fight action, but the women can go, “Oh, he’s not just a thug fighting for the sake of it, something else is going on”.

RD: Any plans for the DVD?

DR: Yeah, it’s the 3rd October and that will have the full making-of, showing how Tony Jaa trained and prepared for those stunts with the stunt team, so that will be really something.

RD: Are you an Asian film fan?

DR: Definitely and it all harks back to dissatisfaction with Hollywood films which are very formulaic and you can almost predict how they’re going to go and the effects they’re going to use.  Asian cinema is so different.  Premier Asia as a label has horror, comedy, fight action, sword action, and they’re all blockbusters from Korea, Thailand and Japan.  They’re all great films on such a massive scale, with real people in crowd scenes, thousands of extras and you just can’t replicate that feeling with CGI. 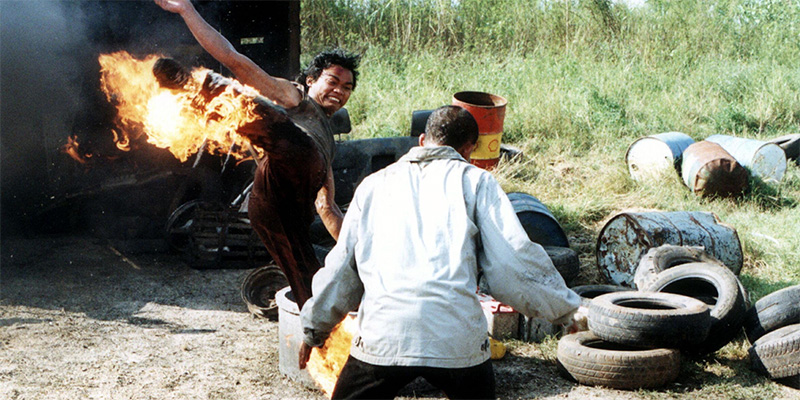 RD: So what is your favourite Premier Asia film?

DR: It has to be ‘Ong Bak’!  On so many levels it works wonderfully and has Tony Jaa as a hero, and as a martial artist I don’t think anyone at the moment can touch him.  We were tempted to just market this as a martial arts film, but we suddenly thought no, this does have wider appeal, people more readily accept subtitled films now and with the other films out at the moment we thought this would give them something different.

RD: How many times have you seen it now?

DR: This was my fifth time and I wanted to save the fifth time to experience the new music score.  The first time was on a VHS screener, but even with that you can’t deny the magic that’s there.

‘Ong Bak’ is available now from Amazon.com, Amazon.co.uk and YesAsia.com.

Far East Films would like to thank Debbie Rowland and Ian Bird.