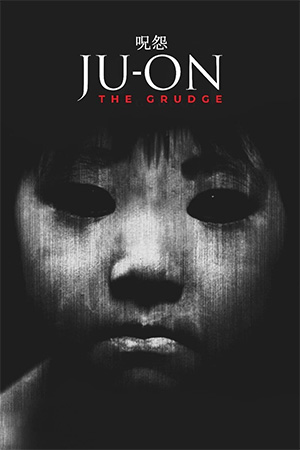 Japan continues its reign over horror cinema with ‘Ju-on’, a massive hit in its home country that is set to repeat ‘Ring’s international success; the obligatory Hollywood remake has retained director Shimizu and adds Buffy herself, Sarah Michelle Gellar.

Despite being the first theatrically released ‘Ju-on’ film, this is actually the third instalment of the series, following on from two straight-to-video predecessors.

But, ‘Ju-on’ can be taken as a stand-alone movie as writer/director Shimizu is less concerned with plot logic than with capturing the mind-bending nature of true terror.  Largely and unashamedly indebted to ‘Ring’s brand of disquieting dread, ‘Ju-on’ offers a family of ghouls to challenge the petrifying Sadako’s fear factor

Rika, a volunteer social worker, is sent to look in on an elderly lady living with her son and his wife.  Rika finds the house filthy and abandoned except for the old woman, but soon discovers an unnerving young boy hiding in a cupboard and is soon subjected to a series of chilling shocks.

But, Shimizu is not content to retread the “vulnerable young woman sleuthing the supernatural” plots of ‘Ring’, ‘Dark Water’ or the Korean ‘Phone’ to name just three.  He ambitiously presents a film with no main characters, and no guarantee who will survive as the closing credits crawl.

Through six chapters, named after six different characters, the mystery of the vengeful spirits and the house’s murderous history is slowly pieced together.  But, Shimizu refuses to provide definite answers for the ghosts’ rage, which will frustrate those looking for pat resolutions.  Instead ‘Ju-on’ ambitiously flashing backwards and forwards in time amongst six different people, including a policeman, a businessman, and a schoolgirl, all connected in some way and who, virus-like, pass on the haunting.

Shimizu, who in the credits name-checks his Tokyo Film School mentors Kiyoshi Kurosawa and Hiroshi Takahashi (respectively the director of the unnerving ‘Cure’ and the writer of ‘Ring’), mounts a series of terrifying moments from the outset, using deceptively naturalistic set-ups that reveal hidden dangers in the corners of the frame or glimpses of the malevolent spirits, complemented by a disturbing, anguished soundtrack.  Then, with the ease of a grand master he suddenly moves his demonic apparitions out into clear view, mercilessly disproving the adage that what isn’t seen will be scarier than what is.

Following on from ‘Ring’, Shimizu includes one scary piece of video footage and some ominously prophetic photographs and has his unquiet spirits move with Sadako’s jerky shuffles, and references ‘The Exorcist’s spider-walk during the climax, but this is more than mere copycat chills.  Expertly conveying the characters’ dread as they stumble into a horrific, chaotic vortex, ‘Ju-on’ recreates the excited tension of watching a horror movie underage (a feeling heightened in two scenes when characters hide beneath their blankets as the ghosts advance on them).

‘Ju-on’ also adds two fine fright-figures to Horror’s hall of infamy with the infant Toshio and his mother Kayoko, slain in the house years previously.  Oseki and especially Fuji, whose crab-like crawl and maddened-eyed stare are going to be homaged to death by lesser talents, vividly bring these pale blue nightmares to life.  Elsewhere, the panicked living are well represented by Japanese “name talent” Ito, Okina and Takeshi Kitano regular Tsuda.

If you think Japanese horror cinema is becoming mired in recently coined cliché, or you simply love being scared, the troubling, dreadful world of ‘Ju-on’ is required viewing.