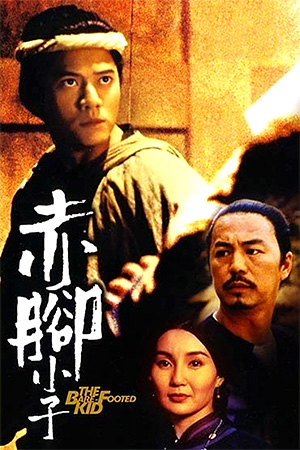 The classic Chang Cheh morality tale ‘Disciples Of Shaolin’ is updated for the 90’s audience and injected with a mixture of fresh faces and veteran Hong Kong performers. The result is an engrossing and emotional new-wave kung fu picture.

Aaron Kwok stars in the title role – a bare-footed peasant who comes to Four Seasons Weavers in search of work. There he is taken in by his late father’s loyal friend (Ti Lung) who has mysteriously changed his name and the beautiful proprietor of the establishment (Cheung). Kwok works hard and is rewarded with his first pair of shoes – a symbol of success in his naive eyes – and the loving attention of a young school teacher (Wu Chien Lien) who helps him with his literacy. However, the Four Seasons Weaver’s have bitter rivals within the town and these rivals resort to a number of unscrupulous means to get rid of the competition. Kwok cannot sit back and let this happen and so uses his fighting skills to administer justice to those causing the violence. The expected gratitude from his friends at Four Seasons Weavers does not materialise though and he is instead upset to find that he is reprimanded by Lung for showing off his skills. A disillusioned Kwok finds himself working for the opposition when he wins a local fighting championship and he is further alienated from those he loves. His new employers shower him with money and praise until he is just another paid ruffian for those he once opposed. It takes a sad twist to make him realise his mistakes and therefore trigger the inevitable conclusion of redemption.

‘Disciples Of Shaolin’ stands as a masterpiece and it was a brave man who decided to remake it. Johnnie To though is a highly skilled director whose bravery is rewarded; while not as good as Disciples Of Shaolin, Bare-Footed Kid is an excellent film and like its inspiration, operates of a number of levels. The focus of Bare-Footed Kid is redemption: firstly we are presented with the main narrative – Kwok’s necessary and painful redemption; then there is the redemption Ti Lung searches for in his love for Maggie Cheung; finally there is the ways Ti Lung tries to teach Kwok the hopelessness of involving himself in the martial world. The elements of love are beautifully presented and retain an earnestness that gives the characters much emotional depth, especially the very subtle love that exists between Ti Lung and Maggie Cheung. It’s also interesting to see Aaron Kwok excel in a role that he’d probably not play today – the naive innocent confused by the corrupt world around him. This remains one of his most accomplished performances.

Alongside the aforementioned elements there is naturally a good portion of action and this too does not disappoint; the restraint of the wirework and good choreography stand as further plus points in this polished production. Those therefore entering the film looking for action will be satisfied, but there is also enough depth to impress the casual viewer. It’s true that the film is sentimental, but when done well (as in this production) sentimentality can draw in and move an audience – again giving the film extra dimensions.

With all of these plus points, the question arises as to whether it’s as good as ‘Disciples Of Shaolin’. The simple answer is no, but the film stands out as one of the hidden gems of the 90’s new-wave kung fu movement and provides superb entertainment for even the most discerning viewer.