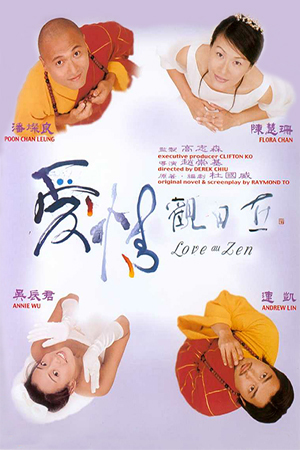 After delivering a unsung gem of a film in last year’s ‘Comeuppance’, Derek Chiu concentrated on the screen adaptation of the successful stage play ‘Love And Zen’. With Chiu’s unique skill of creating something special from something familiar, all seemed to point to another production to further enhance his reputation.

Shortly before his wedding day, Sau (Poon Chan Leung) mysteriously disappears, leaving his girlfriend Jing (Chan) totally confused as to the reasons. Instead of getting too caught up in her own emotions, Jing concentrates on helping her best friend Mila during her up coming marriage to director Chang. Unfortunately though, Chang has chosen Sau as his best man and also has little idea as to where he is. All three persons and their respective guests are left in complete astonishment when Sau does indeed turn up to his friend’s wedding…dressed in the garb of a Buddhist monk. The reasons behind his sudden reappearance as a Buddhist monk is hardly given time to be explained as moments later Mila and Chang have a furious argument at the altar that halts their expected wedding. In an attempt to understand what has happened and where to go from there, Chang follows Sau to his Buddhist retreat. Enjoying the seclusion and pithy statements of their master, both men seem to adapt well to the life of self-reflection. However, shortly after arriving, the two are joined by their respective partners who have followed in a bid to understand why they’ve been deserted. The peaceful environment has a remarkable effect on both couples as they come to understand their relationship and their true feelings. Whereas Sau yearns for enlightenment, Jing looks for the meaning of love and the answers to her questions. By the end of this stay, each person understands more about themselves and certainly more about those they love.

As was the case with ‘Comeuppance’, much of the charm of this superb picture is very hard to explain. One thing is very obvious though: Derek Chiu has created a style that remains very much his own. This style seems to increase with every film and so there is eager anticipation over his next project. The first merit that is becoming a trademark of Chiu’s directorial stamp is the calm pacing of the film; this measured narrative advancement is the sign of a cinematic craftsman who is totally in control of his vision. As with ‘Sealed With A Kiss’, ‘Love Au Zen’ avoids any histrionics yet remains totally absorbing and utterly compelling. The fact that this was originally a stage piece is revealed in the excellent screenplay which concentrates on fleshing out each character in a very believable way. Aiding this important creative cog is the matchless cast who breathe life into each of the roles. Even the often maligned Andrew Lin manages to give a career-best performance; critics have undoubtedly been surprised at how well Lin handled his role and just what ability he really has.

‘Love Au Zen’ barely made a ripple at the local box-office and, on reading the basic synopsis, this may not be too hard to understand. What viewers need to do though is look beneath the surface of this minor classic. The idea of an introspective love story may not sound too appealing, but this is the kind of film that truly rewards the patient viewer. It ranks as one of the wittiest, most intelligently written and expertly delivered Hong Kong features of recent years. Highly recommended viewing.