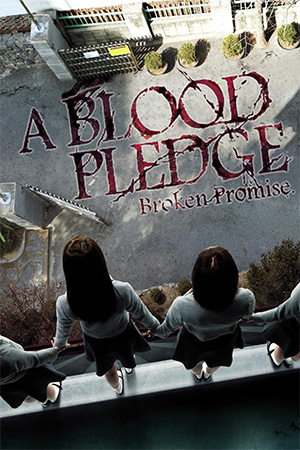 High school student Jeong-eon (Yu Shin-Ae) is shattered when, having arranged to meet her elder sister Eon-joo (Jang Kyeong-Ah) after hours on campus, she instead is witness to her shocking suicide. The following day Eon-joo’s best friends, Soy (Son Eun-Seo), Eun-yeong (Song Chae-Yoon) and Yoo-jin (Oh Yeon-Seo), are brought before the principal and school counsellors to shed some light on the tragedy but they all prove as unaware and devastated as everyone else. With no sign of personal trouble, or even so much as a suicide note, the young girl’s unexpected death remains a mystery. But behind the veil of silent distress there is far more to the close-knit group of friends than meets the eye.

Having been Eon-joo’s closest friend during their formative years, Soy found her social dynamic make a dramatic about face once she befriended wildly more popular students Eun-yeong and Yoo-jin and her former friend found herself on the outer. Petty jealousies concerning boys and social status quickly bubbled to the surface and, one fateful evening, the trio invited Eon-joo to join them in making a bizarre suicide pact in the secrecy of the establishment’s chapel. However, the moment Eun-yeong starts experiencing horrifying visions of their dead, bloodied classmate the three realise that their childish game has the potential for far darker consequences than any of them imagined.

Making its debut in 1998 with ‘Whispering Corridor’, the Girls High School Ghost Story (to take a literal translation of their Korean title) series has proved both spectacularly popular, as well as exhibitive of a longevity largely unseen in Asian cinema, in its home country and abroad. Seldom do many contemporary Asian film series that spawn sequels stretch far beyond a third instalment let alone five, yet Park Gi-hyeong’s (‘Gangster High’, 2006) trendsetting original has managed to inspire sequels every few years to surprising success. Immediately followed by ‘Memento Mori’ (1999), the formula was set in stone and sequel-ised with ‘Wishing Stairs’ (2003) after a brief hiatus. The successive ‘Voice’ (2005) not only started shifting the formula away from the rapidly floundering long-haired ghost cycle but also added a splash of more gore when it became the first in the series to be slapped with the higher 15 rating, where all previous entries had safely slotted into the teen-friendly 12 (PG) bracket. Making his seminal appearance in teen-oriented horror, ‘Sympathy for Mr. Vengeance’s screenwriter Lee Jong-Yong takes the reins of its most recent entry, ‘A Blood Pledge’ (2009), but not without an unexpected jumble of flaws that may go towards hampering previous fans of the series enjoyment of this latest outing.

It’s impossible to say that ‘A Blood Pledge’ (aka: ‘Double Suicide’ and ‘Whispering Corridor 5: Suicide Pact’) isn’t a decent outing in the contemporary run of South Korean horrors or a much darker, and markedly more adult, sequel than its predecessors but it is also weighed down with a number of inherent problems that make it a hesitant recommendation for anyone outside of dedicated Asian cinephiles. Foremost of these is Lee’s decision to abruptly play with the story’s timeline early in the piece, commencing with a straightforward linear style before jarringly shifting into non-linear storytelling. Maybe it was the intent of Lee and veteran editor Kim Sang-beom (‘The Man from Nowhere’, 2010) to confuse or unsettle the viewer with the sudden transitions, signified largely only via gradient variance in the colour scheme, but the result becomes one of mounting confusion over anything else. One moment we’re following the girls as the story unfolds, the next we’re with Soy and Eon-joo as Soy reminisces on their friendship; often without any apparent rhyme or reason, or hint of foreshadowing. Inevitably, the non-linear narrative becomes a hindrance rather than an asset.

The other major hurdles that Lee fails to overcome, as an extension of his own script, are those pertaining to the characters essayed by Song Chae-Yoon (‘Arang’, 2006) and Oh Yeon-Seo (‘Someone Behind You’, 2007). Early in the film Song’s character, Eun-yeong, is graphically shown to be the victim of a violence-stained home life at the hands of her abusive father, yet Lee refuses to explore this avenue further or offer his audience any payoff for its presence other than some glib successive references to the fact at later stages. Eun-yeong remains a fragile, troubled waif throughout; either dismissed by her classmates (who simply intone “Did her father beat her again?” when she fronts to class wearing an eye patch) or lauded over by her clique who blame her paranormal visions on the systemic abuse she suffers at home. As for Oh’s Yoo-jin (also referred to as “Eugene” in some versions), from the outset her ice-cold exterior suggests that she will eventually evolve into the villain of the piece, or at least be exposed as a primary force behind the group’s suicide pact. When that inevitable plot-strand comes to fruition audiences may be completely staggered at the motivation behind the whole exercise. Focal on a jilted boyfriend and an unplanned pregnancy, it seems such a complete stretch of character that a teenage girl would go to such lengths, or harbour such calculated murderous cunning, as to make a mockery of the entire narrative. Especially when ex-boyfriend, Gi-ho (Choi Min), skips out of culpability for the pregnancy thanks solely to his wealthy family background. The two combined elements between the separate characters just comes across so overblown and implausible as to have been engineered solely for their shock value.

Obviously, ‘A Blood Pledge’ has some major stumbling blocks that it must overcome, and it barely manages to scrape together enough elements to provide it rescue from the weight of its own deficits. But there are positives and those aspects do manage to smooth over some admittedly glaring rough spots. Foremost of ‘Pledge’s assets is its expansive ‘scope cinematography by Kang Seung-gi. Being the first in the series shot in the wider format, Kang delivers a lush looking film when the palette requires it, and effective usage of shadow and space during the horror sequences. Of which, Lee’s entry is a whole lot bloodier than its predecessors and film’s showstopper is moment where Gi-ho’s mother is trapped in her car by Eon-joo’s spirit, who ratchets up the inbuilt stereo to such decibel-destroying levels that the matriarch explodes in a deluge of gore. The set piece is such an unexpected shock that its unheralded impact stays with the viewer long after its grisly display has faded from view. Complementing the generous visuals and startling effects is a gentle, lyrical score by Lee Jeong-woo that juxtaposes against the sometimes-jarring imagery quite evocatively. Although it occasionally feels out of character with its sweeping romantic themes, Lee’s composition rarely takes the easy route of stingers or horror movie clichés and the film benefits by daring to be different.

The fact that ‘A Blood Pledge’, as Lee Jong-Yong’s maiden solo directorial effort (since serving as assistant director on Park Chan-Wook’s critically acclaimed ‘Joint Security Area’, 2000), ends up pulling itself together despite the handful of potholes shows that the director harnesses enough talent to make his sometimes-bumpy ride palatable. Once the viewer gets past the jarring non-linear narrative jumps of the first half, everything settles into a richly thick atmosphere and, although Lee makes the occasional misstep, the cast and technical aspects are all fairly flawless. There’s even an upbeat ending, which goes well against the grain for the genre, and the director tempers that with a sting-in-the-tail that neatly ties up a near-forgotten loose end. While it may appear that I’ve given ‘A Blood Pledge’ a critical browbeating, it’s more a simple series of pointers for occidental viewers as to the film’s potential pitfalls that may hamper enjoyment for casual viewers. Lee’s outing in the series really isn’t quite a bad as it might appear, and still contains enough spooky incidence and unexpected scares to make it a decent timewaster for most Asian horror fans.