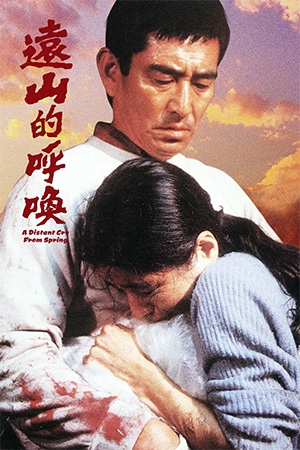 Regular readers will know that I am only too keen to bang the Yoji Yamada drum. While some of his contemporaries went on to have international acclaim while a new generation has emerged and gained plaudits, Yamada works tirelessly in his native Japan. Occasionally, almost accidentally, Yamada will make a film that travels beyond Japan and he will experience a bit of the global attention he previously lacked. Then, almost as mysteriously as he emerged, Yamada will go back to the anonymity outside of his homeland. ‘A Distant Cry From Spring’ is another example of what an exceptional film-maker he is and how, at his zenith, he belongs at cinema’s top table.

Widow Tamiko toils away on her Hokkaido farm, struggling to balance the heavy labour with looking after her young son Takeshi. During a particularly stormy night, a stranger arrives looking for temporary shelter from the elements and, though Tamiko is initially reluctant, she lets him stay in the store-room. The grateful stranger decides to stay to help on the farm and Tamiko’s reticence turns to appreciation. However, as mysteriously as he arrived, the man disappears, much to the shock of the widow and her son. Nevertheless, the stranger returns the next year and this time stays longer, becoming a father figure to Takeshi while providing Tamiko with much needed adult company. There is more to the newcomer than meets the eye, though, and soon questions are being asked about his unusual disappearances.

What you get with a Yoji Yamada film is an intense humanity similar to Kurosawa but with the former’s own gentle appreciation for the inherent kindness in people. It’s a refreshing, life-affirming style of film-making that, in lesser hands, might be mawkish or overly sentimental; in the hands of a cinematic master like Yamada, it is fresh, vital and enchanting. ‘A Distant Cry From Spring’ is the very best of Yamada’s themes, contained in a truly beautiful masterpiece that leaves tears in the eye as the credits roll.

Yamada’s focus can be summed up very well by looking at one of the background characters in the film. Mr Suzuki is a lecherous and desperate local who almost forces himself on Tamiko before he is dragged away by Ken Takakura’s hero. That would probably be the end of this character in lesser films or Suzuki would become some sneering nemesis to Tamiko, determined to bring the stranger down too. Yet Suzuki develops into a contrite, loving and faithful character in his own right who, alongside his two brothers, provides comic relief and a hopefulness in redemption. It’s truly remarkable and shows that Yamada has no interest in black and white heroes and villains, but wants to allow every character to have their dignity.

Redemption is the key theme in ‘A Distant Cry From Spring’ and it is something that touches every character arc. The truth about Takakura’s character isn’t a great surprise, but nor is it meant to be; it’s more about how tragic events can turn even the most unassuming life upside down. Tamiko is the vessel for the stranger’s redemption and their relationship is beautifully written; it’s a real slow-burn love that ends up capturing the attention right until the poignant finale. Credit of course goes to Yamada, but with Takakura at the top of his game and Chieko Baisho every bit his equal, he has the tools to succeed.

If you’ve recently been enchanted by recent hit ‘Minari’ or you simply like exceptional works of cinema, ‘A Distant Cry From Spring’ is a joy. Like ‘Minari’, builds a loving ensemble cast and tells a heart-warming story with sophistication. Yet, as with the best of Japanese cinema, it has that little something indefinable that lifts it above its contemporaries. Another Yamada masterclass.