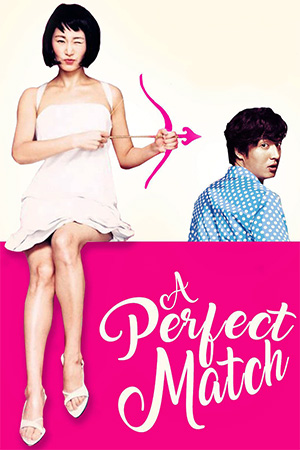 Hyo-Jin is the quietly industrious employee at a Korean dating agency who, while being very talented at finding her clients’ their perfect match, finds nothing but a void in her own romantic life. Her ditzy friends are obsessed with finding that special someone though they are too caught up in day-dreams to achieve their goal and Hyo-Jin invents a boyfriend for herself as not to encourage their prying. One of Hyo-Jin’s latest and most awkward clients – seemingly distant and disorganised Hyun-Soo – leaves an impression that gets underneath the surface of her professional demeanour. As she tries to match Hyun-Soo up with his dream date she is constantly battling with her own feelings and his foibles while also having to face the scrutiny of her colleagues.

How would Asian romantic comedies manage without piano music? This thought occurred to me as I watched ‘A Perfect Match’, a quite good though unremarkable example of a genre that Korea has made its own. Throughout the narrative, the gentle tinkle of piano keys is omnipresent almost to the point of distraction and is a good indication of just how conventional this rom-com actually is. Not that conforming to the generic conventions is necessarily a bad thing if it is achieved with aplomb, but ‘A Perfect Match’ is nothing out of the ordinary.

Much of the problem with ‘A Perfect Match’ lies in its attempts to centre the storyline solely on its heroine – not an unworthy idea in itself, but one that leaves certain other portions of the film lacking. The main drawback with this is that little time is devoted to fleshing out her romantic foil Hyun-Soo and therefore whatever noble intentions Mo Ji-Eun has towards the narrative’s perspective, there is still a fundamental flaw. The viewer waits for some revelation as to why Hyun-Soo is so fascinating to Hyo-Jin, but it never emerges and we are left to ponder why the attraction is there in the first place. Not that Hyun-Soo is an unappealing lead, he’s just some way off the hidden depths or rationales that are expected to explain his seeming disregard of the women he meets; it lures is into thinking that, as with Darcy in ‘Pride And Prejudice’, there are unanswered questions about him though this is disappointingly ignored.

As ‘A Perfect Match’ ambles its way to a pleasant enough conclusion, there are a few moments that hold the attention even when the underwritten background characters get in the way. A few comic moments do amuse though there are a handful of others that are forced and feature ‘funny’ sound effects that soon grate. Hyo-Jin’s closing scenes are among the stronger moments on offer with her unleashing a particularly cathartic torrent of criticism at her self-obsessed friends. The big romantic denouement also succeeds in adding needed pathos to the story.

‘A Perfect Match’ is likely to be overlooked among the illustrious company it keeps in Korea’s most popular sub-genre. Despite moments that show a director trying to craft something different from a common storyline, there is no reason why this should be considered unfair; this is mostly well executed yet only mildly diverting fare.