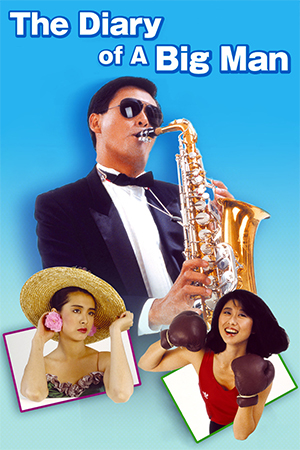 After his huge success in ‘A Better Tomorrow’, Chow Yun-Fat was very rarely off the screens in the Hong Kong cinema circuit. His time was divided between heroic bloodshed thrillers, heartfelt dramas and zany comedies; ‘The Diary Of A Big Man’ is one such comedy.

Chow takes the lead role as a man who, through a set of confused circumstances, marries two different women (Sally Yeh and Joey Wong no less!) in two different cities. All is going quite well as he manages to keep both wives from knowing about the other and, with the help of his loyal friend (Waise Lee), spends enough time with them to continue the secrecy. The facade cannot continue forever though and Chow is confronted with the challenge of keeping the two wives apart after they get to know each other as friends. What follows is a series of elaborate tricks to stop them finding out as Chow and the long-suffering Lee create diversions and complicated explanation for the situations they find themselves in. An extra level of difficulty is soon added when a suspicious cop (Cheng) and Lee’s equally curious girlfriend (Ng) begin to pry into the cover-up.

This very enjoyable comedy gives Chow Yun-Fat a real chance to show another side to his acting skills and he triumphs in what is, on the surface, a very unsympathetic role. His persona drags him out of numerous situations and keeps the audience engaged through the complications that arise. Yeh and Wong are two classy actresses who fill their initially flat characters with real charm and alongside them is the excellent Waise Lee who shines in a refreshingly different role. All three compliment Chow and ensure that the film is very much an ensemble piece.

‘The Diary Of A Big Man’ is not ‘laugh-out-loud’ comedy, but is recommended to all Chow Yun-Fat fans as it contains enough elements to make it a highly entertaining film. The ending lets the film down, but it just about scrapes into the four star bracket.