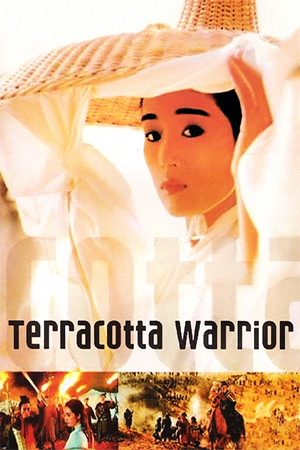 While Ching Siu Tung is enjoying adulation for his choreography on films like ‘Hero’ and, more recently, ‘House Of Flying Daggers’, it is unfortunate that he is rarely seen behind the lens these days. The oft-mentioned, but virtually impossible to obtain ‘A Terracotta Warrior’ is an example of just what Hong Kong cinema is missing while Ching continues to shun directorial responsibilities.

An audacious assassination attempt on the Emperor is thwarted by mild-mannered, but highly-skilled soldier Tian (Yimou) who is subsequently rewarded with the opportunity of a significant promotion. Now among his majesty’s most trusted protectors, Tian is asked to lead an expedition into unknown territory in an attempt to find the secret of immortality for the Emperor. The sage who accompanies the band is also close to completing his own version of the supposedly mythical pill that will grant its taker eternal life, but he keeps his discovery a secret until the necessary experiment has been conducted. As the journey trudges along, Tian encounters beautiful young slave Winter (Li) and, against his stoic nature, begins to fall in love with her. Their love, however, is forbidden by the Emperor who, on discovering this romance, decrees that both Tian and Winter be executed. Tian is given a temporary reprieve and given the ‘privilege’ of becoming one of the terracotta warriors who will be entombed in the Emperor’s mausoleum. Moments before he is sent away, Tian is fed the immortality pill by his lover who subsequently meets a fiery end. Tian remains encased in terracotta until the 1930s when his enforced slumber is disturbed by the crashed aeroplane of desperate actress Lily Chu (Li). The ‘terracotta warrior’ now comes to the defence of Lily – who he believes is his lost love Winter – as she fends off a gang of art thieves led by a suave actor (Yu).

Ching Siu Tung was quoted as saying that ‘A Terracotta Warrior’ drew on inspirations from Kurosawa to Spielberg and this is clear to see: the film starts off with an epic grandeur that recalls ‘Ran’ and ‘Throne Of Blood’ only to switch to a pseudo-‘Indiana Jones’ adventure in the second half. If this sounds like a criticism, it’s certainly not intended as one for ‘A Terracotta Warrior’ is a brash mixture of gentle comedy, swashbuckling action and touching romance that moves along with splendid confidence. While many lesser film-makers would struggle with such lofty aspirations, Ching glides effortlessly through a plethora of sub-genres, moods and tones, eventually creating a blend that is hugely satisfying. As with his much loved ‘A Chinese Ghost Story’, the director is able to switch from a moment of genuine pathos to a rousing action sequence and end the moment with an amusing twist – few directors working in Hong Kong, perhaps anywhere, have achieved this as triumphantly.

‘A Terracotta Warrior’ affords viewers the rare opportunity of seeing Zhang Yimou in front of the lens and, while there’s little doubt as to where his strengths lie, he manages reasonably well. Yimou is emotionally cold and gives way to few emotions, preferring to adopt stoic pose through most of the film. Nevertheless, rightly or wrongly, this proves to be to the productions advantage as his character is intentionally laconic and pensive. The few romantic scenes between Zhang and the sumptuous Gong Li are expectedly powerful, though, as the two were linked off-screen for a number of years. The moments of heartache between the lovers does have an air of realism to it that makes the lead characters immensely empathetic throughout.

If Ching Siu Tung’s work here is lacking in any one area, it must surely be in its duration. Few films are too short, but for all of the complexities of the plot ‘A Terracotta Warrior’ would have benefited from being slightly longer. Another answer would’ve been to edit the slower early scenes and re-invest the time in the 1930s set storyline, perhaps playing a bit more on Tian’s acclimatisation to his new environment. Nevertheless, in Ching Siu Tung’s capable hands, ‘A Terracotta Warrior’ becomes a journey that the audience is delighted to undertake with the director. Bathing various scenes with the visual potency that alludes to Tsui Hark and with a rousing soundtrack at his disposal, Ching Siu Tung unleashes a minor epic that is highly recommended. The only sad note is that there are no immediate plans for him to return to his grand work as a director – let’s hope the right offer comes along to change his mind.