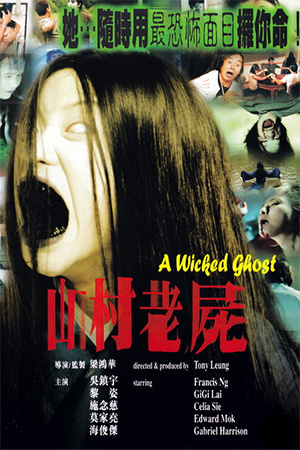 A quintet of young Hong Kongers partakes an eerie ritualistic séance, whereby their collective blood is shared in a communal bowl of water, and the secreted oil from a dead body is burned as incense. Unwilling to join in such nonsense, the quintet whittles down to a quartet when Ming (Gabriel Harrison) opts out. Whilst the four table-bound friends share visions of a woman in red, Ming witnesses a ghostly apparition of a woman in blue skittering about his friends. Overcome by fear, he breaks the circle, in turn spoiling his friends’ fun, and leading friend Rubbish to retire to the bathroom. Seconds later Rubbish comes vaulting from said bathroom, ranting that he has seen a ghost. Cautiously the remaining members of the group converge on the bathroom to see what appears to be their friend submerged in the bathtub. Who then came rushing from the bathroom? Returning to the living room on a blood-curdling scream, they find Rubbish dead on the floor, his face contorted with the last few seconds of his life’s overwhelming terror. What caused him to literally “die of fright”?

At first Ming turns to his sister, reporter Cissy (Gigi Lai), but has his pleas ignored when her fiancé Jack (Edward Mok) surmises that, with Ming’s previous troubled background, the death may have been drug related. With two of his friends succumbing to unnatural suicides, seemingly induced by an unseen third party, Ming turns to his drama class teacher Ho (Francis Ng) hoping to solve the riddle before it claims his girlfriend Annie (Celia Sze). Believing in transferred energies, Mo takes up Ming’s concerns and begins investigating the story. Their research leads them into the hillsides and deserted ghost town, Yellow Hill Village. An elderly man in a nearby shop recites a story about a wronged woman, Cho Mei Yan, and how following her murder sixty-six of the villagers died. Mo and Ming’s only link to the past is the mysterious Keung Li who, once located, makes them aware they are dealing with a much more dangerous, and far-reaching, force than they had initially believed: the vengeful ghost of Cho.

Hong Kong harbours a long history of ghostly cinema that primarily stems from the superstitions and folklore of its surrounding regions, yet post the runaway success of Hideo Nakata’s Japanese spook fest ‘The Ring’ (1998) at the local box office, filmmakers suddenly abandoned the hopping vampires and urban legends of tradition and shifted their attentions to mimicking the style of Nakata’s hit. This brings us, in a fashion, to triple-threat (writer, producer and director) Tony Leung Hung Wah’s yawn-inducing exercise in tedium, ‘A Wicked Ghost’ (1999). While Leung’s central supernatural antagonist, Cho, bears more than a passing resemblance to Nakata’s ghostly Sadako, this is pretty much where all comparisons between the two films begin and end. Though the spirit’s medium to channel its vengeful energies is an interesting one by default, outside of a bravura sequence where latent medium Harrison is besieged by the ghosts of Yellow Hill’s dead, there is little in ‘A Wicked Ghost’ that manages to either generate tension or create a sense of menace. For a horror film that hopes to elicit an atmosphere of foreboding or dread this is a fatal flaw.

Realistically, such a result was never going to come as any great surprise, as by and large Tony Leung’s resume has never been one that has risen much above middle-of-the-road. Largely working as a writer throughout the eighties, he hit his stride in the early nineties when his headline-inspired script for ‘Taxi Hunter’ (1993) (spawned from the Hong Kong public’s then extraordinary backlash against the city’s outrageous cab-driver antics) was brought to the screen by socio-political commentator Herman Yau, with a powerhouse performance by Anthony Wong that brought Leung’s central character vividly to life. Leung continued his association with actor Wong throughout the ’94 – ’95 period, culminating in a writer/producer credit on Tony’s directorial debut ‘The New Tenant’ (1995). Yet, by the tail end of the nineties Leung had hit the skids, writing and producing some diabolically dire potboilers that either closed theatrically no sooner than they had opened, or were consigned directly to video. Evidence suggests that Leung is perhaps a better writer than he is director, yet while his productions are not as snappy nor entertaining as fellow independent filmmaker Billy (‘Paramount Motel’) Chung, at least they’re a step up from counterpart Sam (‘Prostitute Killers’) Ho.

Where Leung’s ‘A Wicked Ghost’ fails worst is definitely not in the writing itself, as the characters and revenge motif are mostly fleshed out in satisfactory fashion, but within the actual structure of the film. From the ghastly apparition contained within the promotional artwork, the viewer would approach the film expecting something appropriating a pulse-quickening frightener, yet apart from a handful of competently realised images Leung fails to produce any tension or indeed real scares per se. The story just meanders and unfolds as blandly as any generic telemovie might, missing opportunities at every turn and leaving the viewer supremely frustrated at its ineptitude. Headlining actors Francis Ng and Gigi Lai are virtually wasted, with the former merely engendering the impression he accepted his role as his bank balance was low the week the film was shot, whilst the latter leaves viewers stultified as to what happened to the emotional depth she had exhibited in erotic novelist-turned-director Julian Lee’s debut work of the same year, ‘The Accident’. This leaves the remainder of the film to rest on the shoulders of Gabriel Harrison (Ho Chun Kit), a young American Chinese actor, who clearly does not have the necessary experience to accomplish such a feat.

‘A Wicked Ghost’ is a vaguely interesting premise, let down by some rather pedestrian direction and generally wooden performances by its largely unknown cast. Admittedly there are a handful of scenes that quicken the pulse somewhat, but they’re few and far between and definitely not incidence enough to recommend an otherwise lacklustre work to a wider audience. Under a different director, this may have been a genuinely effective ghost flick with room for some visual pizzazz and moody camerawork; as it stands it’s a missed opportunity at best and so lacking in the full utilisation of its horror conventions that it becomes a rather dull and listless exercise in audience boredom. For a better example of low budget ‘Ring’ imitators check out Billy Tang’s ‘Dial D for Demons’ (2000) instead.