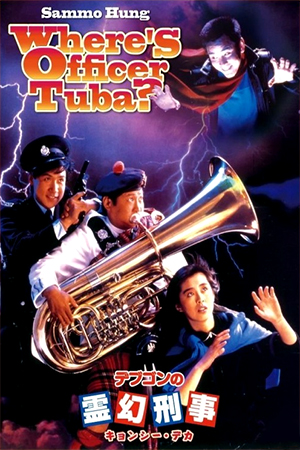 Throughout the 80’s Sammo and his team managed to effortlessly create a plethora of hugely entertaining action comedies, albeit on fairly small budgets. This addition to the Hung collection is a fairly generic cops and robbers tale, with a little supernatural thrown in to make it a little different.

Sammo plays “Tuba”, a fairly cowardly cop who would rather play in the police band than get involved in anything remotely dangerous. The precinct’s “supercop” (David Chiang) uses him in an undercover operation to deal with some extortionists, but gets killed when the exchange becomes violent. Sammo is left holding his hand as he dies and unwillingly promises to avenge his death. Unfortunately, Inspector Chiang returns as a ghost, only able to communicate with Sammo, and forces him to fulfil his promise.

As mentioned, the 80’s are full of action comedies, with most of the best being produced or directed by Sammo. He has superb comic timing, and his performance here will have you laughing out loud. As ever, a Sammo film must have action, and although sparse, we are treated to some quality encounters featuring the likes of Yuen Wah and Hwang Jang Lee amongst the rest of the talented Hung Ga Ban. Lightning fast movements with perfect editing combine to add to Sammo’s huge list of entertaining fight scenes. Jacky Cheung performs capably, and with some artful doubling is made to look a pretty tough fighter.

The attractive Joey Wong provides the female interest, but is given little to do, and the story would not change much if her character were never there. However, she does provide a source of comedy moments, one of which involving a family meal which is absolutely hilarious. Overall, this is an above par HK action comedy and would please all fans of the genre – especially fans of Sammo like myself.