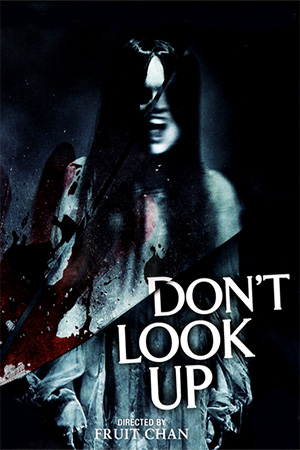 In 1928 Hungarian film director Béla Olt (Eli Roth) attempted to bring the tale of Matya (Zelda Williams), a peasant girl whom folklore claimed entered a pact with gypsy demon Beng to sire his progeny, to the screen. The film was never completed and Olt vanished. Eighty years later troubled young filmmaker Marcus Reed (Reshad Strik) has become obsessed with finishing what Olt started, to the point of shooting his version on the abandoned Transylvanian sets where his predecessor disappeared. Plagued by horrifying precognitive visions, as well as struggling with his ex-girlfriend’s battle with cancer, Reed is not in a sound psychological state to be helming a horror film.

Against the warnings of their Romanian location manager, Grigore (Lothaire Bluteau), that the location is cursed Reed and his producer, Josh Petri (Henry Thomas), push into production regardless. However, it’s not long before a series of strange events occur that threaten to sabotage what is already proving a difficult shoot. The set is swamped by a phantom stench filtering from a locked upstairs room. An electrician is blinded in a freak accident. The onsite editor disappears one evening whilst reviewing the day’s rushes. Most disturbing of all, footage from the 1928 production finds its way into Reed’s negative even though everyone onboard knows such a thing is a physical impossibility.

Sitting down and experiencing Fruit Chan’s English language debut, ‘Don’t Look Up’ (2009) (a remake of Japanese director Hideo Nakata’s pre-‘Ring’ feature debut, ‘Joyû-rei’, 1996), reiterates and cements the fact that American film producers and the Hollywood system simply have no idea how to engage and utilise Asian filmmakers to their fullest advantage. It’s a home truth that has been proven time and time again ever since action-master John Woo first set foot on American soil back in 1992 to helm what would go on to be the extremely troubled shoot that was ‘Hard Target’ (1993). Woo’s countryman Ringo Lam, imported on the strength of his ‘City on Fire’ (1987) and ‘Full Contact’ (1992) saw his American debut, ‘Maximum Risk’ (1996), taken out of his hands in post-production and extensively re-edited once test audiences showed ambivalence towards his final cut. And the story of the Pang Brothers, who scored an international hit with ‘The Eye’ (2002), US debut under Sam Raimi’s Ghost House Pictures imprint, ‘The Messengers’ (2007), is the stuff of embarrassing legend (suffice to say, after lukewarm test screenings the Pangs were not invited back for reshoots and Venezuelan director Eduardo Rodriguez was employed to make the veteran editing/directing brothers’ film “work”). One can only imagine what goes through the money-men’s heads when they sign up an internationally acclaimed artisan, based on their existing body of work and inherent creativity, and then do nothing but stifle and repress that vision at every opportunity to meet the American formula.

Which, in a slightly long-winded fashion, brings us to Fruit Chan and ‘Don’t Look Up’, a project largely borne of the impact left by Chan’s most prominent (globally recognised) commercial outing, ‘Dumplings’ (2004), and writer/producer Brian Cox’s (‘The Dead One’, 2007) desire to fuse the Chinese auteur with a largely unknown Japanese horror property. Any student of Hong Kong cinema will tell you that ‘Dumplings’ was Chan’s “jack-in-the-box”, a production emboldened by mainstream producer Peter Chan (‘He’s a Woman, She’s a Man’, 1994) and the efforts of cinematographer Christopher Doyle (‘Ashes of Time’, 1994), as well as the opposite of almost all the director’s other works. Originating from the largely independent background that gave rise to the Hong Kong Second Wave, Chan had always been known for features strong in social realism, quirky characters, creative storytelling and inventive visual technique that bordered on a documentary stylistic. Thereby, what one gets when they put Chan in the director’s chair on an American horror film is that aesthetic forced through the perspective of a singular Chinese focus.

What the audience ultimately gets with the finished product is one of the more unusual oddities to have emerged from the American horror genre in some time, albeit one that’s central premise had been trumped by the earlier releases of similar titles such as the effective ‘The Hills Run Red’ (2009) and the relatively bland ‘Midnight Movie’ (2008). Where screenwriter Cox does manage to amalgamate with Chan’s oeuvre, working from the original by Hiroshi Takahashi (‘Ring’, 1998) and Hideo Nakata (‘Dark Water’, 2002), is amidst the various quirks and complexities of the focal characters. Australian actor Reshad Strik (‘The Hills Have Eyes 2’, 2007) has perhaps the toughest role as the troubled Marcus Reed being that, as the lead, due to his wealth of negative character traits he’s not an easy anchor for the viewer to immediately sympathise with. If anything, there is significant distance between Strik’s character and the viewer in that very few, if any, can empathise with a character so fraught with psychological unrest and disturbance. Henry Thomas (‘Dead Birds’, 2004), as Reed’s producer Josh Petri balances the excesses of Strik’s ingénue nicely in turn becoming a surrogate lead for the audience. Rounding out the primaries, wonderful French-Canadian actor Lothaire Bluteau (‘Black Robe’, 1991) lends the story some welcome humour as Romanian location manager Grigore.

Amongst the supporting cast, as gaffer Davis Kevin Corrigan (‘The Next Three Days’, 2010) weighs in the prerequisite conflict to the narrative once supernatural forces take hold of the production and his temperament is inflamed. Carmen Chaplin (‘All About the Benjamins’, 2002), grand-daughter of the legendary Charlie, as hopeful young actress Romy Bardóc gives proceedings some colour and vibrancy, where Alyssa Sutherland (‘The Devil Wears Prada’, 2006) as Reed’s cancer-stricken ex-girlfriend Claire flitters in and out of the story arc to eventually provide the film’s unexpected, and revelatory, twist ending. Director and occasional actor Eli Roth (‘Inglourious Basterds’, 2009) pops up early as the ill-fated 1920’s Hungarian filmmaker Bèla Olt. From a visual perspective, although outside of ‘Dumplings’ Chan has largely been known for the earthy realism of his works, herein he works effectively with veteran Hong Kong cinematographer Poon Hang Sang (‘Fearless’, 2006) to construct an atypical if not abstract design. In keeping with the film’s title, there is an almost deliberate attempt made to keep the camera positioned somewhere above the action or sequences framed with curiously skewed or bisected compositions.

Of the film and story, itself, ‘Don’t Look Up’ works hard at maintaining interest even though it is beset by an eccentric cast of characters that don’t always make for a comfortable ride. There are some effective horror sequences, achieved through a combination of practical makeup effects and computer-generated visual effects, which often startle or repulse and Tony Humecke’s (‘Prey’, 2007) Hungarian folk-music flavoured score generates an eerie gothic ambient atmosphere to the entire production. Humecke’s contribution to the film is indicative of the overall cultural cross-pollination that makes Chan’s production the strange beast that it is: by setting the tale in Transylvania there is an immediate connection with European folktales and centuries-old gothic verse, which is also present in the fictional gypsy legend of Matya that forms the basis of the core horror element. Against these elements Chan plays off a contemporary film crew working to a strict schedule and budget alongside aspects of melodrama that are so prevalent in Hong Kong cinema.

Fruit Chan’s ‘Don’t Look Up’ is an odd bird, as the casual Occidental fan of the (so-called) “Asian extreme” brand will find little within it to engage them beyond the plot-strand of its vengeful gypsy spirit whereas devotees of Hong Kong cinema will undoubtedly find an undercurrent in the piece that is at odds with the usual formulaic repetition of American genre film. The film is not without its flaws, inclusive of a sometimes-confused narrative structure, but it’s worth a look against its widespread negative reaction for long-time fans of the director. In many ways, as much as ‘Don’t Look Up’ opposes the cinematic canon we have come to expect of Fruit Chan, it is at its nucleus instantly identifiable as bearing his characteristically distinctive stamp. It’s no ‘Hollywood Hong Kong’ (2001) or ‘Public Toilet’ (2002) but it is, at its heart, sometimes challenging, often eccentric and frequently bizarre.