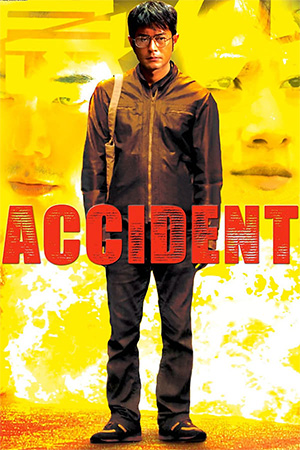 ‘Accident’ is the first film director Soi Cheang has crafted under the Milkyway films umbrella. He had previously directed the decent ‘Love Battlefield’, ‘Dog Bite Dog’ and the fun yet shoddy ‘Shamo’. For ‘Accident’, Soi Cheang douses his Miike-lite feeling that he brings to his films, instead opting for a subdued approach to the material.

‘Accident’ had the working title of ‘Assassins’, changing it was probably a wise move as it conjures up your typical Hong Kong heroic bloodshed images. Instead, ‘Accident’ concerns a group of killers that operate through the medium of uuh accidents. It sounds better than it is. In the usual Milkyway fashion, a basic premise is run with in a stylish Johnnie To manner, who sits in the producer’s chair.

Louis Koo (insert tan gag here) plays Brain, the leader of the hit gang, looking the Thunderbirds type with a pair of large glasses. His underlings are Lam Suet as Fatty, Stanley Fung as Uncle and Michelle Ye whose character name I never caught. They are efficient at their job, organising and carrying out an effective hit over the opening ten minutes but it becomes obvious that Uncle isn’t the full shilling and that Brain is probably the most paranoid man in Hong Kong.

When a hit seems to go completely wrong, or does it?, Brain becomes obsessed with the idea it was a deliberate sabotage attempt from a group of rivals. He sets his sights on a mysterious insurance agent played by Richie Ren and engages in a game of cat and mouse which may, or may not exist solely in Brain’s mind.

The strength of ‘Accident’ is in its details, the quiet planning and design that goes into the hits is intricate and quietly thrilling, much more so than watching yet another Triad gunslinger point a .45 at someone for the millionth time. ‘Accident’ feels very much like an Eastern slant on a Hitchcock movie, everything is very small scale and the whole movie drips with regret, paranoia and guilt.

Louis Koo is great as Brain, I find him a very underrated lead player, even though he can rival David Dickinson in the tan stakes. Apart from Stanley Fung as Uncle, the other characters are more ciphers than fleshed out characters but this matters little in such a movie as ‘Accident’. Everyone brings snap and efficiency to their roles, making the most of their parts. Richie Ren is very good as the film’s possible nemesis, you see him carrying out his daily business as Brain spies on him but now and then Ren will seem like the most dodgy man in Hong Kong, a Del Boy of the insurance world. All this is suggested, and is good work on Soi-Cheang and Ren’s part.

Despite the nature of the kills, ‘Accident’ is a subtle thriller, wrapped in mystery and coincidence. It could easily have been loud and garish, like ‘Shamo’ was but ‘Accident’ stands hundreds of feet above. Weaving a tangled web, ‘Accident’ is actually elegant in its simplicity but by the film’s conclusion, whatever your thoughts are on the movie itself you are likely to be more cautious of crossing the road or getting out of a car.