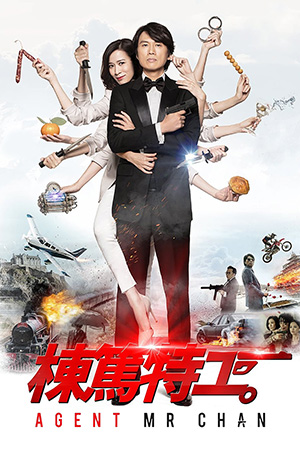 Super agent Chan (Wong) is not averse to using those around him to achieve ‘World Peace’. When he goes all the way to the altar with one young lady just to catch her arms-dealing godfather then leaves her shamed in front of her family, the bride swears revenge. As the years pass, Chan has a fall from grace and is reduced to working as a low rent private eye alongside his ever reliable sidekick. The scorned lover, meanwhile, has risen to the ranks of police superintendent of Hong Kong and concentrates much of her force’s efforts on trying to put Chan behind bars on the slightest pretext. The feud is temporarily forgotten though when various famous figures in Hong Kong are being inexplicably shamed in public in an orchestrated way and only former agent Chan can be relied on the find whoever is behind it.

There’s always an element of trepidation in a reviewer tackling a comedy filmed in a language that they do not understand. If the humour is slightly verbal or based on colloquialisms, the task is even more frightening, especially when said film has performed very well in it’s home market. ‘Agent Mr. Chan’ is one such film, a local hit that has given famed comedian Dayo Wong one of his biggest ever successes. As Wong’s reputation is based on wordplay and satirical Hong Kong references, this is a potential problem for the non-native.

While there might be much more in ‘Agent Mr. Chan’ for Cantonese audiences, for this reviewer it comes across as a particularly tiresome Bond spoof. The various lobby posters for the film that had a series of pastiches of James Bond movies and these prove to be a much wittier nod to the British agent. ‘Agent Mr. Chan’ is a comedy that seems to go on forever, the longest one hundred minutes I can remember sitting through. There’s every chance that local audiences might have been floored by some slick one-liners and knockout gags, but for most of the rest of this is a bewildering experience.

Dayo Wong and Charmaine Sheh do have a chemistry on screen together that gets the story going through its slower patches though even a jet engine is unlikely to push the narrative out of the stalled position it finds itself in. Obviously it is just a framework for the humour, but it is so carelessly put together that it becomes a distraction. Then, when all else fails, the film-makers wheel out the star cameos: ‘oh look, there’s Miriam Yeung’; ‘Sammi Cheng is game in sending herself up’; ‘ah, there’s Alan Tam, there’s Michael Hui’. It’s all very pleasant as a celeb-spotting exercise though it does remind you of the much better films these stars have already been in, productions you should be watching instead.

This review comes with the caveat that all of the aforementioned criticisms might melt away for those who can fully appreciate the language. Yet ‘From Beijing With Love’ was a good reminder that a Bond parody could please both local and international audiences effectively. ‘Agent Mr. Chan’ simply isn’t in the same league.