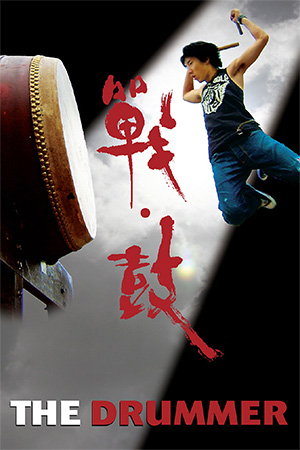 After impressing with his 2005 directorial effort ‘Rice Rhapsody’, Kenneth Bi brings us ‘The Drummer’, a film that rests mainly upon the shoulders of Jaycee Chan despite stellar support. After some mixed performances in previous efforts, this may initially seem a foolhardy piece of casting by a film-maker aiming for more something more cerebral.

Angst-ridden youth Sid (Chan) unwisely involves himself with the beautiful young wife of a high-ranking gangster (Tsang), taking the warnings of his friends in his sulky stride. The husband, Stephen Ma, eventually discovers the infidelity and demands that Sid’s triad father Kwan (Leung) hand his son over for some impromptu capital punishment. A previous friendship means that Kwan eventually negotiates to ‘merely’ maim his son, but secretly sends the rebel without a clue to the wilds of Taiwan with his trusted aide Chiu.

Out in the wilderness, away from the influence of a corrupt city, Sid comes under the influence of the tribe of Zen drummers who practice on the mountain nearby and tries to insert himself into their near-monastic order. He eventually wins all but one suspicious young pupil (Lee) over and finds the solitude and meditation beginning to turn him from being a bellicose trouble-maker to an introspective young adult beginning to face up to his resposibilities. Meanwhile Kwan finds himself betrayed by former associates and sent to jail for a substantial stretch. Yet the correspondents between father and son now take a much more rewarding turn, despite ominous machinations occuring behind the scenes.

They say the apple doesn’t fall far from the tree and with Jaycee Chan giving one of his better performances as a troubled youth in need of a disciplined lifestyle, it’s easy to recall one particular film from his father’s past. Although ‘Drunken Master’ may appear to be a very different production to this rewarding drama, there’s more than a little of the iconic portrayal of Wong Fei Hong in Jaycee’s work. Starting off as a truculent solipsist who swaggers through Hong Kong with disdain for those around, he then matures into someone with a far greater appreciation for life and family; I couldn’t help but recall his father in a kung-fu classic that may be some distance from this in tone, but shows how both have a genetic ability to convey arrogance then quiet humility. He may never be Hong Kong’s foremost thespian, yet his display here finally banished memories of ‘Twins Effect II’ – where Chan showed all of the emotional dexterity of Metal Mickey – from this reviewers mind forever.

Chan is flanked by some impressive acting talent to ensure that, should he falter, the film will still progress confidently. Tony Leung Kar Fei relishes his scenery-chewing anti-hero role and enjoys a few choice scenes with that most elegant of Hong Kong screen kingpins, Kenneth Tsang. Both men prove to be more intimidating than the simple parameters of the screen allows and give the simple story its necessary frisson, providing some consolation for the underuse of Angelica Lee.

Lovingly shot by Sam Koa – who goes to great lengths to juxtapose the hectic concrete jungle of Hong Kong with the verdant mountains of Taiwan – ‘The Drummer’ is something to savour in what may prove to be a hugely productive career in the director’s chair for Kenneth Bi. This is more than just a story of the troubled and certainly a notch above the usual redemption-through-arts film that is more than a little familiar to us all. This is a drama that dares to serve up quiet contemplation along with the expected epiphany of the protagonist. Bi serves up familiar twists and turns, yet the way they are presented raises them above expectations, successfully mixing the elements of the triad drama with something quite the opposite. The fact that ‘The Drummer’ gels together so competently is perhaps its greatest commendation and makes Bi’s future projects even more anticipated.