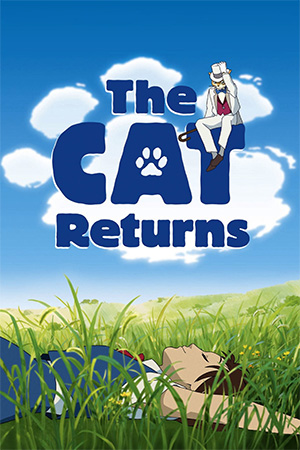 For 17-year-old Haru, life is pretty hectic thanks to the pressures of trying to remain popular at college and get the boy of her dreams to notice her.  However, life is about to get far more complicated when she selflessly saves the life of a cat who is about to be run over by a truck.  As it turns out, the cat is in fact the son of the King of the cat kingdom and in return for her good deed Haru is to receive a string of lavish gifts.  This would be fine if she was a cat but a hundred mice and a field of catnip in her front garden aren’t exactly fitting prizes for a human but this is not the end of it.  The prize de jour comes in the form of marriage to the King’s son which horrifies Haru but it would appear that she has no say in the matter.  Now Haru must see if there is anyone out there that will not only believe her tall tale but perhaps be able to help her before she finds herself whisked (or should I say whiskered) away to live out her days as the wife of a cat!

Whilst watching ‘The Cat Returns’ on a lazy Sunday afternoon, I found myself reminiscing the wacky kid’s adventure films from the 1980s.  I’m referring here to the likes of ‘Labyrinth’, ‘The Neverending Story’ or ‘The Goonies’, those films that seemed to house such infectious charm and outrageous scenarios that they couldn’t fail to suck you into their magical worlds.  The reason behind my trip down memory lane is that ‘The Cat Returns’ encompasses exactly that same kind of universally appealing storytelling that, whilst not as deep or meaningful as other Ghibli epics, is still immensely enjoyable and addictive.  Of course some may frown upon it’s somewhat “fluffy” approach and seemingly moral-less story (or at least it would appear so in comparison to Ghibli’s most acclaimed efforts) but what ‘The Cat Returns’ achieves is filmmaking at its simplest but at the same time, often most pleasurable.  The idea of a topsy turvy world in which a child becomes lost is far from original but the technique of telling the tale manages to reignite the child in all of us and the enchanting characters never fail to amuse viewers of all ages.

When it comes to the animation for ‘The Cat Returns’, its clear from the off that the film is aiming for a slightly more refined overall look than what has become the norm with most Ghibli productions.  Gone are the majority of comical and cuddly illustrations that filled the likes of ‘My Neighbour Totoro’, ‘Spirited Away’ and ‘Pom Poko,’ and in their place are a set of finely crafted and elegant characters.  This artistically stylish approach proves to be very pleasing on the eye and conveniently enough, is somewhat fitting for a film based primarily around such graceful creatures.  Obviously some of you may be disappointed by these alterations but in my opinion, each and every one of the the characters is still every bit as captivating and comical when required and the human-like traits and movements that the cats adopt is nothing short of sublime.

Controversially enough, I feel ‘The Cat Returns’ is a very strong contender in the catalogue of Ghibli titles, even with its lack of moralistic layers.  What makes it work so well, at least for me, is the ease in which it taps into the child in all of us and creates a rip roaring adventure that is fun for all the family.  Films like these are a rarity these days and it’s often nice to have a film in your collection that you can always rely on to bring a naive smile to your face.