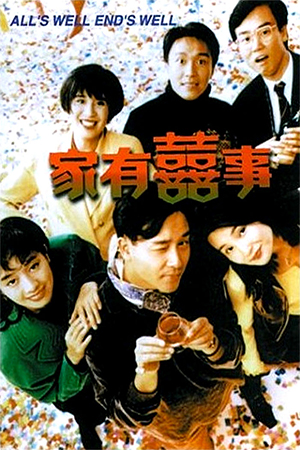 Foon (Chow) is a wildly popular disc jockey who commands a legion of adoring female listeners and uses his airplay to woo yet more. One particular caller, Miss Holliyok (Maggie Cheung) manages to get Foon’s attention due to her obvious beauty and bizarre obsessions with different Hollywood films. Although he tries to win her affections, the arrogant lethario’s superficial ways and flirtations fail to impress her. However, a strange accident renders Foon  temporarily insane and leaves Holliyhok thinking about her true feelings for the man who has surprisingly endeared himself to her. Meanwhile, his brothers are also facing major decisions in their lives after recent events; his older brother’s wife has walked out after years of poor treatment while his other brother finds himself battling the overtly butch auntie who has come to visit. By the end of the film’s duration, each brother has not only realised who their perfect partner really is, but also discovered some important lessons about their own inadequacies.

Clifton Ko is an old-hand at these Chinese New Year ensemble comedies and once again throws together the elements that had previously hit such a chord with local audiences. The use of the term ‘throw together’ isn’t accidental though as the film displays much of the chaotic discord that is often bemoaned by critics of Hong Kong comedy. There’s no doubt that some of the Hollywood pastiches do hit the mark and raise the odd smile, but these are spread too thinly to be sustained throughout the full 90 minute duration. For those unfamiliar with some of the typical conventions of this family comedy, ‘All’s Well. Ends Well’ may be a jarring experience; Clifton Ko doesn’t make any excuses for mixing extravagant humour with a heavy dollop of sentimentality. However, it’s hard to dislike a film comedy that tries to have a positive message as is presented here, no matter how convoluted it sometimes feels.

‘All’s Well, Ends Well’ is not a ‘Chow Sing Chi Film’ per se – its impressive cast means that even a star of Chow’s magnitude is not allowed to dominate things for too long. It is this attempt to give equal running time to everyone that highlights another department where the film is found wanting i.e. its lack of focus. There’s still enjoyment to be had in this Hong Kong comedy though as long as the potential viewer is willing to forgive its various shortcomings.