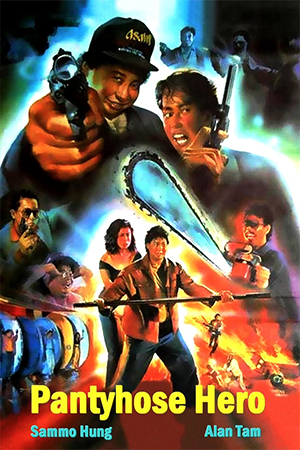 ‘Pantyhose Hero’ has caused quite a stir since its first release with many believing it to be homophobic and extremely distasteful. While I understand their reasons, I am of the opinion that this is a great kung fu comedy, which is admittedly not politically correct!

Sammo and Alan are cops assigned to a murder case in which the killer is apparently targeting homosexuals. As a result, the 2 cops are ‘trained’ to act like Gay men in order to lure the assailant into their trap. What follows is a hilarious set of comedy sketches coupled with its fair share of bloody encounters. The finale in particular is extremely violent as well as being expertly crafted.

What makes films like these such a joy is the fact that you don’t find them anywhere else. Hollywood would never dare send up the gay community – nor would it fill such a riotous comedy with the same level of graphic violence. That said, the comedy is all tongue-in-cheek and the actors clearly love every minute of it (as confirmed in the outtakes). There is not as much fighting as older Sammo films, but what is on show is up to his modern-day best – also showcasing Sammo’s last great physical performance.

In conclusion, this is another entertaining and highly recommended addition to the Sammo canon. However, be warned, because if you are likely to be offended by such politically incorrect humour, then I’d definitely avoid!!