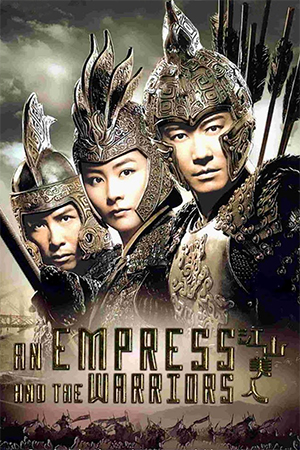 With the world and his wife jumping on the bandwagon of 21st century swordplay films, it was only a matter of time before Ching Siu-Tung, one of the pre-eminent directors of the last incarnation of the genre in the early 90s, jumped into the director’s chair. His return to a big budget production where he would be the creative brain behind it was more than welcomed by this reviewer. Yet, it would appear that having spent years toiling as a director on television series and someone utilised solely as a choreographer by the current crop of swordplay visionaries, Ching has lost that edge that etched his name into the annals of Hong Kong cinema history over two decades ago.

Ten kingdom China is torn apart by a neverending war between the army of the Yan and the Zhao. Having continued for generations and with thousands of lives slaughtered in the process, another epic battle between the forces begins and the units are mobilised. In the ensuing chaos though, the king of Yan is mortally wounded by an arrow through the chest and retreats to his base to name his successor. As there is no son in the bloodline, the king bestows the honour on his trusty lieutenant and adopted son Muyong (Yen), while his Machiavelian nephew seethes in the background. His anger manifests itself when he hastens the king’s demise and then plots the downfall of his rival. Muyong is uneasy with his responsibility though and passes over the privilege to the now empress Yen Feier (Chen). Yen is ready to prove her worth and asks Muyong to train her for the task, unaware that the stoic soldier is secretly in love with her.

Meanwhile her cousin is already plotting her downfall and hires a vicious tribe of assassins to complete the task. The killers ambush the new ruler in a distant forest and hit her with a poison dart, but the timely intervention of a prodigiously skilled doctor Duan (Lai) saves her life. Duan hides his past as a fabled fighter and nurses his pretty charge back to health of the ensuing months. By the time Yen is ready to return to the throne she is faced with strong feelings for her saviour, feelings that jeopardise her regal position.

After a few years of ice cold swordplay films where the characters are robot-like protagonists who are surrounded by the various directors’ creations of visual splendour, it’s almost refreshing to encounter a story that triesw to stir the heart rather than just the eye. I say ‘almost’ because Ching Siu-Tung’s work here goes from being occasionally touching to emotionally ripe, verging on melodramatic. It starts as so many similar productions do: long, voyeuristic shots of resplendent period detail and scores of armoured extras surrounded by epic Chinese landscapes. Yet it quickly appears that this grand paean to the past is cut from a very different cloth to its predecessors.

Ching Siu-Tung had that special ability of his own artistic vision with a story and characters who drew the viewer into their world. The ‘A Chinese Ghost Story’ trilogy are outstanding examples of his craft and that skill he brought to the medium in the 80s and 90s. ‘An Empress And The Warriors’ lacks that control and descends into soap-opera drama rather than stirring the cinematic soul the way Ching famously could. When a Mandopop tune plays to a slo-mo romantic montage, it immediately becomes evident that this is a lesser work when compared to the director’s illustrious past and a good portion of the current new-wave blockbusters.

The combination of an earthy, more realistic aesthetic – sans the usual flying and balancing on wasp’s eyebrows – with an overbaked love triangle that overshadows all around it is an uncomfortable one. The plot jumps from one pivotal moment to the next with very little exposition or development of genuine tension and the overall effect is of a three hour film that has been badly abridged to just 90 minutes. While big budget battle sequences and glorious sets are appreciated, they mean precious little if the story around them is never given the opportunity to grip the viewer. Even the romance between Leon Lai and Kelly Chen appears rushed and the pair lack the kind of chemistry that can paper over these cracks. The Ching Siu-Tung of 2008 could learn much from his far younger self.

‘An Empress And The Warriors’ is enticing enough to divert the attention, but without anything substantial within the duration it is quickly forgotten. It’s beautifully shot, the action is well-designed and the scope of the production certainly takes the breath away. Unfortunately the lead trio lack charisma in their roles and they face a villain that is too weakly written to be anything over than underwhelming. The genre may be in desperate need of a heartfelt masterpiece that is a triumph for the writers rather than just the cinematographers. Alas, Ching Siu-Tung’s ‘An Empress And The Warriors’ is not it. And so we wait.