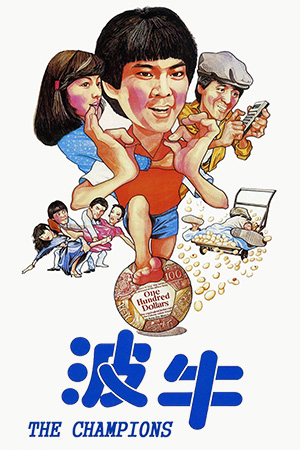 Yuen Biao plays a young country farmer who gets into trouble in his local village, his first inclination is to stay and face the music. His uncle, however, notes that the victim of the trouble is an important member of the community and the punishment will therefore be severe. Escaping the ensuing charge of vengeance seeking locals, the naive youngster travels to Hong Kong and to the home of a one of his uncle’s trusted friends. Unfortunately the said friend has been dead for three years, leaving Biao on his own in the big city. After a few chance meetings though, Biao quickly makes a couple of new friends, foremost among these being a street footballer who immediately spots the potential playing skills of the newcomer. A run-in with a Hong Kong football hero means that the attempts of both friends to join a proper club are barred and Biao himself is forced into being the general dogsbody of the team. When Biao notices the corruption within his team, the constantly improving footballer is persuaded to join the rival club and gain the appropriate revenge. The scene is set for the clash between the newcomer and the idolised professional as only one can be truly deemed the best player in Hong Kong.

On a personal level, the thought of a film that combines my two absolute passions – Hong Kong movies and football – was simply too good to be true. The added bonus of the wonderful Yuen Biao increased the expectation levels to their apex. However, ‘The Champions’ doesn’t really live up to the mouth-watering prospect that was initially suggested. The football scenes are everything that is expected of a Hong Kong film; there is incredible acrobatics and ball skills on display. This is a trend that regular viewers will no doubt be familiar with as even the most ordinary activities are given an extra special boost when handled by a local director (i.e. ‘The Chinese Feast’). When the camera isn’t focused on the field though, the spark that ignites the action scenes simply isn’t there. Too much of the running time is devoted to over-the-top comedy that proves uninteresting by the end of the production. Normally this local humour can be endearing (especially the simple 80’s comedy), but here director Brandy Yuen makes the cardinal error of forcing it into every scenario. By the time the end credits start to run, there is the definite feeling that strong potential has been wasted.

‘The Champions’ is a wasted effort rather than a waste of time as there is enough to keep viewers alert. It’s also a well-proven rule that Yuen Biao rarely appears in anything that isn’t at least watchable (there are, of course, exceptions to this) and so this is still a decent slice of Eastern entertainment.