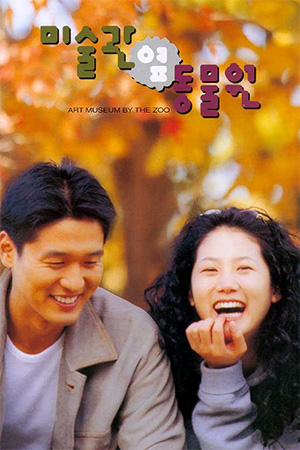 Chul-Soo leaves the military to be with his beloved fiancée, travelling to her apartment to give a surprise. He lovingly cleans it, prepares a dinner for her and patiently awaits her return. Unfortunately, Chul-Soo is the recipient of the surprise as he discovers that his fiancee has moved out and the current occupant, Hi-Chun, is not impressed by the effort. Eventually, Chul-Soo contacts his errant girlfriend and learns that she is about to marry another man, much to his utter dismay. Taking pity on his situation, Hi-Chun decides to let him stay at the apartment temporarily until he can get back on his feet. Though the heart-broken stranger is initially critical of his day-dreaming host, the two begin to understand each other’s predicament and start to collaborate on a script together that distills together their personal experiences.

First-time director Lee Jeong-hyang fashions a mellow romantic comedy from a popular conceit – two people who start off resenting one another, but gradually become friends. Interestingly though, this Korean hit never really throws its stars into a romantic maelstrom even though the clichés seem to indicate that it’s leading pair are heading into familiar territory. Lee Jeong-hyang. Instead, the onus remains on the thin line between their day-to-day dealings with each other, their reluctant friendship and their joint screenplay. All three elements are fused together to create an enticing, though flawed, semi-romantic comedy.

As with many accomplished films, the gentle pace hides a skilful narrative hook that keeps its audience patiently awaiting the pay-off. In the case of ‘Art Museum By The Zoo’, the hook is the vast difference between the leading pair; Hi-Chun is the dreamy-eyed fantasist while her sparring partner is the bitter, critical realist. The gulf between the two is emphasised enough for the inevitable reconciliation to be eagerly anticipated. The one drawback is that Chul-Soo is painted as such a disagreeable character that the melting of his icy demeanour appears hard to swallow. As he spends most of the first half savagely attacking his host, the question arises as to why she doesn’t evict him. It’s therefore difficult to sympathise with his plight, though the eternal optimism of Hi-Chun helps us ignore this rather incisive flaw.

Korean cinema has embraced one of the oldest genres and continues to produce variations on it that run from the depressingly average to the sublime. ‘Art Museum By The Zoo’ seeks the comfort of the generic conventions while also gently subverting the audiences expectations of the production. Ably supported by popular actress Shim Eun-ha and newcomer Lee Sung-jae, director Lee Jeong-hyang manages to generate enough of an ambience to make ‘Art Museum By The Zoo’ a more than pleasant diversion. It may be accused of heading towards a dead-end, but the journey is where the enjoyment lies.