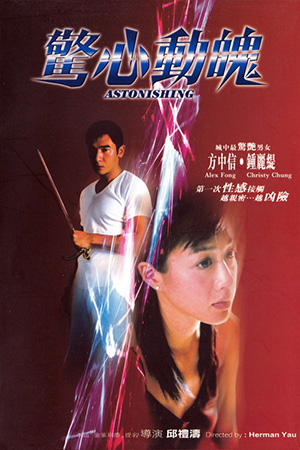 Mandy (Christy Chung) and Kenny Tang (Alex Fong Chung-Sun) have what outwardly appears the picture perfect, fairy-tale ending married relationship. Kenny is a senior research consultant at a high-tech behavioural sciences centre, and Mandy lives a contented life of luxury on his generous remuneration. A gathering of the centre’s graduate alumni held annually by one of Kenny’s former classmates (William So) to celebrate a different milestone every year, showers congratulatory praise on the couple for their seventh wedding anniversary. As the evening progresses, and Mandy finds herself in a deeper and deeper state of inebriation due to overindulgence in red wine with her husband’s assistant, Fiona Chan (Sasha Hou), peripheral chatter references the mysterious Dr. Lo (Ng Yip-Kwong), the centre’s director who has remained unseen in over two years. The party is given its greatest surprise when Lo turns up late in the evening unannounced, yet in her drunken haze Mandy is only able to make out the director’s ram’s head walking cane, one she had glimpsed earlier that day in a city music store. Leaving the function, Mandy asks her husband after the eponymous Lo, only to be informed no such person exists, and a near-miss motor accident on the way home becomes the catalyst for a strange series of events to follow.

Ten days on, Mandy awakes with only vague recollections of the previous days, finding the house empty and an unnatural sense of ill-ease prevailing over her. A shopping trip for her husband finds her purse filled with Fiona’s credit cards, and her weekly volunteer work at a home for the elderly is soured when the institute’s director, Ko (Sammo Hung), runs her off the premises claiming not to know her. Bewildered, Mandy races to her husband’s workplace only, once again, to be addressed as “Fiona”, even by her own husband! Becoming increasingly more and more distraught and disoriented, Mandy feverishly seeks anything or anyone that can confirm her identity, yet the orphanage she was raised in has long closed, and her psychiatrist only recognises her as “Fiona” as well. By sheer opportune chance, her ex-boyfriend’s sister Candy (Rammie Guo) lucks across her wandering the streets in a daze, confused, alone, and stricken with terror. Mandy soon remembers that everything started after her husband’s social engagement, with a strange DVD and the message delivered therein that her husband had another lover and soon she would lose everything she holds dear, including her very identity itself.

Opening with the unexpectedly shocking images of laboratory mice tearing apart one of their own newborn (animal lovers beware, the fleeting images may prove quite distressing), director Herman Yau immediately sets the tone for what follows in ‘Astonishing’ as that initial grisly image is profoundly reflective of the film’s primary theme. The central theme being, of course, what happens to the individual when its own society seemingly turns on it, deconstructing the self and effectively leaving it as defenceless and helpless as newborn? Ironically, not the first time Yau has tackled the subject, however this time around the focal question becomes the centre point of the film’s narrative, and unlike previous similar thematics this time he offers no “easy way out” for his central protagonist. In ‘Taxi Hunter’ (1993), Anthony Wong’s vigilante ended up with society on his side, Tony Leung resolved the inevitability of his existence with self-sacrifice in ‘War Of The Underworld’ (1996), as did Andy Hui in ‘Killing End’ (2001), and Danny Lee’s debt-ridden police unit drew their resolve with a few laughs and stepping outside of the laws they upheld in ‘Shark Busters’ (2002), yet Christy Chung’s Mandy Tang herein is left nothing but a steadfast and harrowing descent into desperation, despair and eventual psychosis. And that descent is equally as harrowing and frustrating for the viewer as well, however the resolve this time out is…well, though momentarily and breath-takingly haunting, successive twists only succeed in bludgeoning the viewer with clichéd contrivance over the genuine sting in could have had, but we’ll get to that shortly.

Similarly, by locating the story in “A city in Asia” (per the film’s opening title card), Yau and co-scripter Albert Lai leave the door nebulously open, intimating that their terrifying tale of loss of identity could happen anywhere, any place, maybe even to you yourself, the viewer, permeating an altogether more “faceless” slant to Christy Chung’s torturous journey. Away from the industry that made her name for some years, taking in only controversial* roles in Nonzee Nimibutr’s ‘Jan Dara’ (2001) and Pan Nalin’s ‘Samsara’ (2002) in the interim between her departure at the turn of the Millennium and return in Wai Ka Fai’s Hui Brothers homage ‘Fantasia’ (2004), Canadian-Chinese actress Chung actually excels here, even though the piece is essentially only a modestly budgeted paranoia-thriller. Her descent into completely fractured psychosis is by and large believable, as well heart-touching within the sympathy it generates. The more cynical (and let’s face it, the internet is full of cynics) would perhaps purport that loss of identity would equate with moral freedom, however when presented with complete loss of identity how many would really brush such an emotionally devastating event aside over crumbling into a pit of despair and futility once they experienced their spouse or partner happily going about their daily lives with some-one other than them? It’s a tricky emotional and sociological question that Yau and Chung tackle effectively, delivering an answer all too real in its impact – the individual would fight tooth and nail to prove the validity of their own identity and personality.

Behind the engrossing face of a plight that would send any sensible individual off the rails, Yau weaves a myriad of other sly, almost imperceptible threads, which keep his audience guessing where Chung’s tale of woe will eventually come to a climax. Under the lush, glossy veneer of Yau’s vision and Joe Chan’s rich cinematography, lurks a curiously plausible suggestion that all is truly not as it seems. Astute viewers will pick up on hints of where the plot might be leading during Alex Fong’s conversation with Alex Fong Lik-Sun (two Alex Fong’s in the film a coincidence? Perhaps…) during the opening act’s alumni gathering, and references to the omnipresent Dr. Lo should spark many into somewhat deeper ponderings. The “reality of illusion” is a constant throughout, most tellingly exhibited early when Chung, unable to deal with her desperation, attempts to commit suicide by prostrating herself in front of an oncoming car on a darkened road…only to be passed nonchalantly by two youths on motor-scooters. Yes, appearances are consistently deceiving throughout the entire duration of Yau’s thriller; by the time Rammie Guo turns up as the sister of Chung’s ex-boyfriend, being the only person that recognises her for who she really is, the viewer has already started questioning the authenticity of Guo’s character. Is she real, or yet another cipher?

Yet for all Yau’s hard work, consistently staying one step ahead of his audience and keeping them guessing, plus a fine acting turn from Chung, it’s the film’s wrap-up that succeeds in almost sinking all that has preceded it without a trace. Not to mention Brother Hung’s bombastic “horror” score, which self-consciously draws attention to itself thanks to its heavy-handedness (and let’s lose a point too for abstractly labelling Kelly Chen’s country-styled ballad “Yesterday Was A Lie” as a jazz piece while we’re there). Though it’s probably giving away too much, the ‘Manchurian Candidate’ reference should clue most viewers in to where Yau is heading with his mostly frightening story of identity erasure, and when cracks start forming in Alex Fong’s steely façade, you’ll no doubt guess exactly what Yau and crew have in store…yet the pre-climactic revelation still shocks with its cold and calculated exercise in contrived paranoia. Then, sadly, on the back of such a bravura moment for an (obviously) mid-budgeted piece, Yau throws it all out the window for the sake of a handful of shock upon shock final moment twists. One “dream/reality” shock cut would have sufficed, three really leaves the audience more confounded than Chung’s character. Thankfully, the film’s final twist (which would have upped the tally to four and was featured in the Hong Kong theatrical trailer) has been excised completely prior to release; had it been retained it would most definitely have made nonsense of the whole premise!

All in all though, a promising and well executed thriller, slickly photographed, overbearingly scored, and a fine dramatic turn for the always watchable Christy Chung, hampered in the end by the necessity to wind up proceedings with audience friendly “horror shock tactics” over leaving viewers speechless with a mind-blowing revelation. Well worth giving your time to, as long as you’re prepared for things to go out on a whimper rather than a bang. Long-time fans of Hong Kong cinema should also get a kick out of a brief cameo by former action icon Sammo Hung, as the director of the aged care home where Chung’s character serves as a volunteer (or does she?); it’s nice to see there’s still a place for some of the older icons of Cantonese cinema, even past their prime. It seems largely ironic that Herman Yau, a man best known internationally for a shocking true-crime thriller from 1993 (‘The Untold Story’), should turn out his best work in 2004 in genres Western viewers aren’t associative of with his name (‘Herbal Tea’ and ‘Papa Loves You’), yet produces routine to average work in his (Western) favoured thrillers. ‘Astonishing’ is a step up from the parallel released ‘Dating Death’ (2004), and definitely well worth more than a casual glance, as well as indicative of the ever-changing face of Hong Kong cinema, and career diversity potential within the Herman Yau canon.