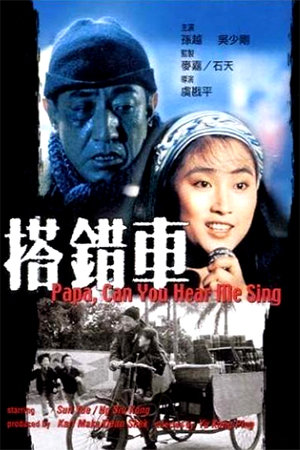 Uncle Dumb (Suen Yuet) is the mute resident of a Taiwanese shanty town who scrapes together a living by collecting the empty glass bottles he finds on the streets. One evening he happens upon a baby girl wrapped in a blanket with a note attached pleading with whoever finds her to look after her. Despite barely being able to look after himself, Uncle Dumb takes the baby back and names her Ah Mei, resolving to bring her up as best he can. Even though his decision causes his girlfriend to leave, Uncle Dumb raises Ah Mei and helps her in later life with her aspirations to be a singer. Ah Mei initially finds modest success in singing in small bars, but when she is finally discovered great things are predicted for her. Sadly the price of fame is her public rejection of her humble upbringing, a reluctant denunciation prompted by her new manager, that shatters Uncle Dumb.

‘Papa, Can You Hear Me Sing?’ is an exercise in how to pummel your characters into submission by subjecting them to all manner of personal misery and tragedy. Like a Taiwanese version of the overwrought Nigerian and Ghanaian melodramas screened everyday on U.K. satellite television, ‘Papa Can You Hear Me Sing?’ takes sadistic glee in putting very likeable characters through great hardships while giving them very little time to breathe. The first thirty minutes, in particular, features a relentless catalogue of privation that includes a drowning, a fire that destroys a great portion of the town and the poignant death of a background character. The onslaught of pessimism makes Thomas Hardy look like Enid Blyton.

When the narrative moves onto its main focal point – the rags to riches story of Ah Mei – it stumbles upon another problem. As the relationship between adoptive father and daughter had been skirted over in favour of drama earlier in the film, it is hard to believe in the relationship later on. The talents of the two performers can only do so much to elicit the much needed bond between the two characters; director Yue Ham-Ping’s jump from the infant Ah Mei to the adult one is a severe oversight that renders many later moments of poignancy redundant. Had we been able to see the struggles the pair had to go through together during Ah Mei’s formative years, the closing melodrama would no doubt have attained a greater impact.

There’s no doubt that much is wrong with ‘Papa, Can You Hear Me Sing?’, but there’s also an undeniable power of never quite knowing how the narrative will turn out. In a Hollywood production of a similar nature, the audience would be properly braced for the inevitable reconciliation and heart-felt pathos. Asian films are far less easy to predict and one is never entirely sure how Yue Ham-Ping’s work will turn out. There are also a few suitably haunting scenes of misery, moments that may be cynically packaged, but have the Asian grit that enables them to have an air of reality. Much of this is thanks to a fine turn by Suen Yuet who gives his character the needed dignity that ensures he is never just an object of pity. With a performance of his calibre in its corner, ‘Papa, Can You Hear Me Sing?’ is not a waste of time, just a potentially potent piece of film-making undone by its many short-comings.