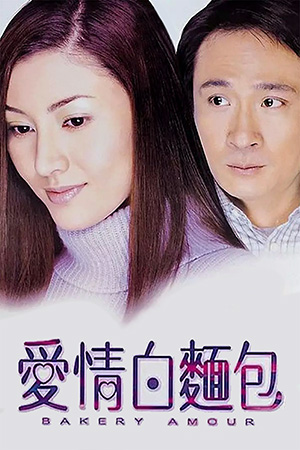 Some occasional viewers of Hong Kong cinema have bemoaned the fact that stars such as Jackie Chan, Jet Li, Chow Yun Fat and Michelle Yeoh have left for Hollywood and therefore the Jade Screen is on its last legs. However, regular movie watchers will undoubtedly have noticed that Hong Kong film-making is enjoying a resurgence of acting talent and there remains a number of stars in the local cinemas; names such as Lau Ching Wan, Andy Lau, Stephen Fung, Sam Lee, Sammi Cheng, Anita Yuen, Jordan Chan and many others are proof of this. Near the top of this prestigious list is Francis Ng. Ng’s popularity was initially gradual, but in recent years the local star has started to increase his fan-base world-wide with performances in films such as ‘Bullets Over Summer’ and ‘The Mission’. Released on Valentine’s Day 2001, Bakery Amour gives this highly talented actor a chance to take the role of a romantic lead and finally galvanise his position at the top of the Eastern market. The result is very much a mixed bag.

Uncle Jet (Ng) moves to the big city to stay with his nephew and enjoy a change of scene from the village life he was accustomed to. On moving into a new flat, Jet discovers a whole batch of letters that have been misdirected to his home and have never reached their intended destination – a beautiful local woman, Lok To (Reis). With curiosity getting the better of him, Jet opens a few of the letters and finds that they are all love letters from Lok To’s former boyfriend who has since moved to Paris. The romantic side of Jet persuades him to create a plan to get the lovers back together after this unfortunate misunderstanding has kept them apart and so he opts for a very subtle way of achieving this. Firstly, Jet pumps his wealth into a local bakery and, after befriending Lok To, persuades her to act as a consultant at this new workplace. Then Jet contacts Lok To’s ex-boyfriend, Jia Lam, in Paris and persuades him to come back to Hong Kong. Finally, with the bakery garnering impressive local reviews, Jet hopes that Jia Lam’s love of local bread will bring him to the bakery and in contact with the one he loves. This doesn’t work out as intended though as Jia Lam brings his new girlfriend with him and, even more importantly, Jet begins to realise that Lok To has become so much more than just a friend to him.

The obvious strength of ‘Bakery Amour’ is the two lead stars: the always charming Michelle Reis as a very attractive love interest and the quirky, yet absorbing Francis Ng as the hopeful protagonist. The first half of the film concentrates on these two fine performers and the realisation in the mind of Uncle Jet that his relationship with Lok To is beyond mere friendship; this makes up the most entertaining portion of the film. Francis Ng is especially enjoyable as the slightly eccentric, but honest Uncle Jet and he rises to the challenge of playing a romantic lead, something that Michelle Reis is fully experienced as. The film does, though, run out of considerable steam when the main focus becomes Jia Lam and his choice between his old love Lok To and his new girlfriend; this becomes a somewhat uninteresting turn in narrative and the promise the film’s opening half displayed is sadly brushed away. Only in the closing fifteen minutes does ‘Bakery Amour’ regain the potential it had of being a touching romantic comedy for local audiences and fully realise the lead pairing’s talents. The sudden switch of the film’s focus must lay on the shoulders of director Steven Lo as he allows the first half of the film to hurtle along at a steady pace and then gets the second portion of the film stuck in uninvolving misunderstandings and entanglements. With better pacing and firm concentration on the lead pair instead of the weak relationships of the latter part of the film, ‘Bakery Amour’ could have been an excellent romantic comedy. As it stands though, the film is a flawed attempt that offers a pleasant 100 minutes of entertainment, but nothing more substantial.